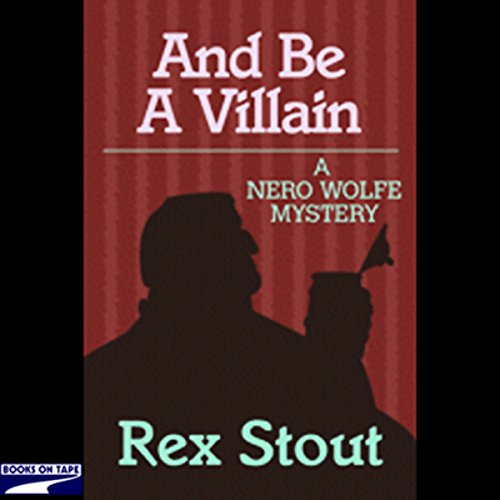 And Be a Villain

And Be a Villain

Madeline Fraser, radio talk show host extraordinaire, had a natural dread of dead air. So when one of her on-air guests signed off at the mike after drinking a glass of a sponsor’s beverage, it was a broadcaster’s nightmare come true.

Enter Nero Wolfe. He agrees to take the case, with his sizable fee contingent on his solving the murder. But to Wolfe’s surprise, everyone connected to the case now lies in unison about it. And as the portly detective soon discovers, the secret worth lying about only hides another worth killing for.

“It is always a treat to read a Nero Wolfe mystery. The man has entered our folklore.” (The New York Times Book Review)

A grand master of the form, Rex Stout is one of America’s greatest mystery writers, and his literary creation Nero Wolfe is one of the greatest fictional detectives of all time. Together, Stout and Wolfe have entertained - and puzzled - millions of mystery fans around the world. Now, with his perambulatory man-about-town, Archie Goodwin, the arrogant, gourmandizing, sedentary sleuth is back in the original 73 cases of crime and detection written by the inimitable master himself, Rex Stout.

"[Prichard's] Nero Wolfe is suitably commanding." ( AudioFile)
"It is always a treat to read a Nero Wolfe mystery. The man has entered our folklore." ( New York Times)

Das sagen andere Hörer zu And Be a Villain