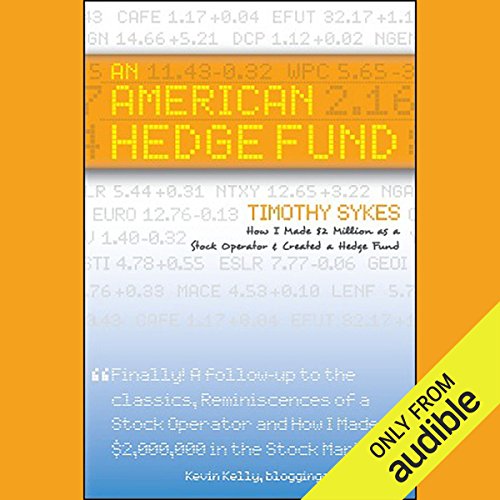 About $2 trillion is invested in the hedge-fund industry, and yet, due to industry regulations, the general public knows little about them. This book will change that.

Timothy Sykes turned $12,000 of Bar Mitzvah gift money into $1.65 million by trading thousands of stocks from 1999 to 2002. He managed the number-one Short Bias Hedge Fund from 2003 to 2006, starred in the television documentary Wall Street Warriors, and appeared regularly on CNBC - all before the age of 26. It's been a wild ride.

This Rocky-like story is the first realistic look at the world of stock trading and hedge funds. It will educate and inspire everyone.

"This is the first book I'd give to somebody if I were trying to interest them in the stock market." (Greg Feirman, Founder and CEO, Top Gun Financial Planning)
"There's certainly a dash of Holden Caulfield to Sykes, but there's at least an equal part Larry Livingston, the trader in Edwin LeFevre's classic Reminiscences of a Stock Operator." ( Dow Jones Newswire)
"A clearly written account of a natural trader coming of age, a Catcher in the Rye for traders. Highly recommended if you want to be or understand a trader." (Aaron C. Brown, Executive Director at Morgan Stanley and author of The Poker Face of Wall Street)