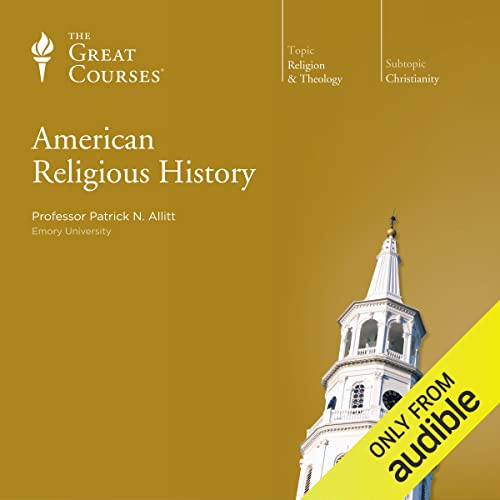 Have you ever wondered why America, unlike virtually any other industrial nation, continues to show so much religious vitality? Or why are the varieties of religion found in the United States are so numerous and diverse? In this vigorous series of 24 lectures, Professor Allitt argues that the best way to look for explanations of this truly remarkable vitality and diversity is to study the nation's religious history.

That's a task, though, that involves more than simply examining religion from the directions you might expect, including its formal beliefs, its ideas, its communal or institutional loyalties, and its styles of worship. It also requires looking at religion's influence on life "beyond the pews" - investigating the subtle but important links that have long brought religion into close contact with the intellectual, social, economic, and political concerns of Americans, such as Martin Luther King Jr. using a mixture of biblical references and appeals to patriotism to press the case for civil rights.

The lectures also address American religion as a sensory experience - a phenomenon whose deep spiritual and social meanings can in part be seen in the design of churches, synagogues, mosques, and temples; heard in the sounds of hymns, prayers, and chants; smelled in Catholic or Buddhist incense, or even tasted, as you discover when you learn why the casserole may be the most "Protestant" of all dishes!

Professor Allitt explains with joy and enthusiasm, which makes listening equally entertaining and educating. Definitely going to come back to this course as well as to many of his other courses available on audible. I hope for more topics covered by him in the future :)