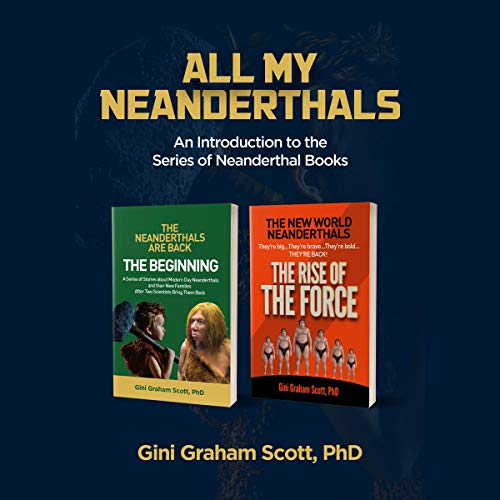 The Neanderthals Is Back tells the story of the first two scientists to bring back six Neanderthals through cloning and the help of a surrogate mother. After they are raised in a lab for five years with the help of a nursery school teacher, they are placed in a group home. Afterwards they experience a series of adventures and challenges as they grow up.

The New World Neanderthals: The Rise of the Force tells the story of the owner of a robot factory who hears about the success of the first Neanderthals. He decides to enlist the help of other scientists to bring back Neanderthals to form a workforce using them instead of robots. After he does so successfully, a team of detectives recruit six of the Neanderthals to help them find and a capture criminals after the cops have been unable to do this. Once they are trained, this new Neanderthal force goes on a series of missions.

All My Neanderthals includes the first three chapters from each book.

Gini Graham Scott, PhD, JD, is a nationally known writer, consultant, speaker, and seminar leader, specializing in business and work relationships, professional and personal development, social trends, and popular culture. She has published 50 books with major publishers and over 150 books through her company Changemakers Publishing. She has worked with dozens of clients on memoirs, self-help, popular business books, and film scripts.