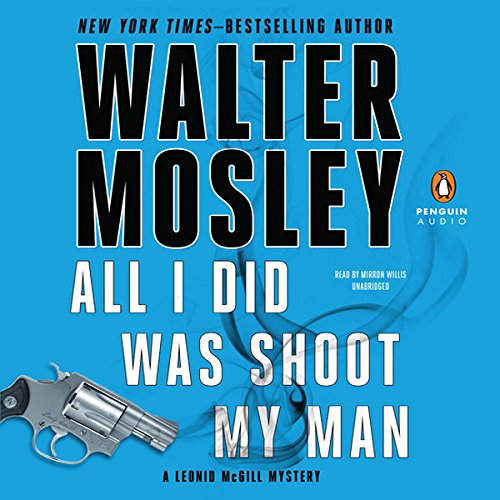 All I Did Was Shoot My Man

In the latest and most surprising novel in the best-selling Leonid McGill series, Leonid finds himself caught between his sins of the past and an all-too-vivid present.

Seven years ago, Zella Grisham came home to find her man, Harry Tangelo, in bed with her friend. The weekend before, $6.8 million had been stolen from Rutgers Assurance Corp., whose offices are across the street from where Zella worked. Zella didn't remember shooting Harry, but she didn't deny it either. The district attorney was inclined to call it temporary insanity - until the police found $80,000 from the Rutgers heist hidden in her storage space.

For reasons of his own, Leonid McGill is convinced of Zella's innocence. But as he begins his investigation, his life begins to unravel. His wife is drinking more than she should. His oldest son has dropped out of college and moved in with an ex prostitute. His youngest son is working for him and trying to stay within the law. And his father, whom he thought was long dead, has turned up under an alias.

A gripping story of murder, greed, and retribution, All I Did Was Shoot My Man is also the poignant tale of one man's attempt to stay connected to his family.

“The best [McGill] book yet.” (The Boston Globe)

“Like the city he works in, and the Mosley books he inhabits, Leonid McGill is complicated, savvy and full of surprises: a would-be champ who can't win for losing, a fighter who can never be counted out.” (The Wall Street Journal)

“A big city never looks the same once you've walked its streets with a hard-boiled private eye, preferably someone as perceptive and thoughtful as Leonid McGill.... [He] doesn't so much walk the city as case it for danger. Keeping pace with him is as much an education as an adventure.” (The New York Times Book Review)