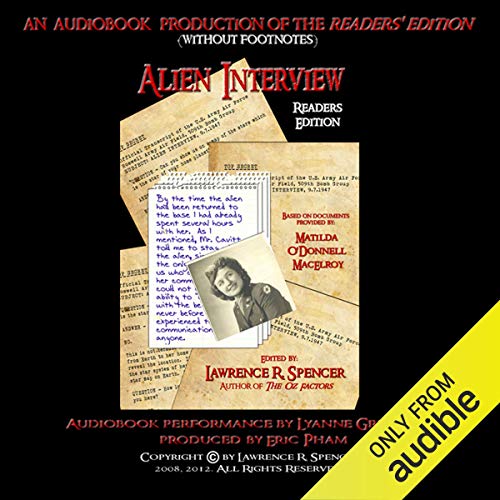 In her letters she asserts that the transcripts are an exact recording of a series of interviews she conducted with an extraterrestrial being as part of her official duty as a flight nurse in the U.S. Army Air Force. During July and August she interviewed a saucer pilot who crashed near Roswell, New Mexico on July 8, 1947. The being she interviewed identified itself as an officer, pilot, and engineer with an Invasion Force from a civilization she refers to as 'The Domain'. Their space craft use the planet Venus and the asteroid belt as space ports in our solar system. The Milky Way galaxy is a tiny area within the territorial possessions of 'The Domain'. The interview transcripts were kept secret - under threat of death - by Nurse MacElroy for 60 years, and released a few months before her passing at the age of 83.

This is an abridged version of the book Alien Interview. It does not include the footnotes, index, or table of contents. Only the letters, personal notes, and copies of top secret government interview transcripts from Roswell, New Mexico. The interviews were conducted with the pilot of a crashed UFO at the US Army Air Force Base in July and August of 1947 under government direction by Flight Nurse Matilda O'Donnell MacElroy (deceased).

Just Open your mind it all makes sense !