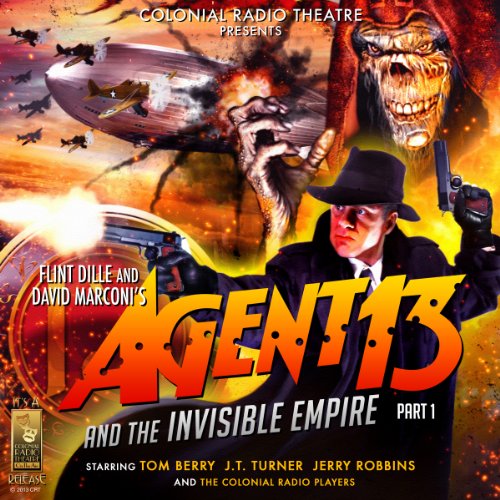 Agent 13 and the Invisible Empire: Part I

As a child, you were abducted from your home by an organization known only as "The Brotherhood". Your past was taken from you. Your name, erased. The Brotherhood trained you in the arts of power and deception, and you seemed destined to become one of their finest operatives.

Then you learned the truth. The Brotherhood planned not to guide mankind along the paths of enlightenment, but instead to remake the world in their own image. So you fled, and swore to stop them by any means necessary.

In the fall of 1937, the Brotherhood emerged from its sinister shadows, plotting a debilitating global war. And only you stand in their way.

You're Agent 13: The Midnight Avenger. A master of disguise, your quest will take you from the streets of Istanbul to the underbelly of Chinatown, and bring you face to face with new friends and old enemies, devilish death-traps and fatal femmes, and a conspiracy as old as civilization itself.Bursting forth from the pages of the exciting and popular novels written by Flint Dille (The Transfomers Animated Series, An American Tail: Fievel Goes West) and David Marconi (Enemy of the State, Live Free or Die Hard), the award-winning Colonial RadioTheatre on the Air presents the next step in thrills and suspense.  Filledwith vivid performances, immersive sound effects and an exciting original musicscore, Agent 13 and The Invisible Empire: Part One is a nail-biting production overflowing with action, mystery, adventure, romance and wit thatnever comes up for breath. Dramatized for radio by Deniz Cordell, Music by Jeffrey Gage, Produced by Rich Matheson, Directed by Jerry Robbins. Cover art by Jeff Hayes. Contains mild adult language and violence. Parental discretion is advised.