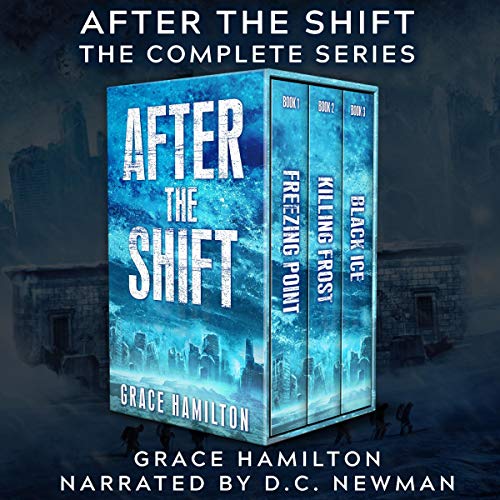 After the Shift: The Complete Series

In the dawn of a new Ice Age, families everywhere are taking to the road to escape the frigid landscape - but you can’t outrun the cold.

No one could have predicted the terrifying impact of human interference in the Arctic. Shifts in the Earth's crust have led to catastrophe and now the North Pole is located in the mid-Atlantic, making much of the eastern United States an unlivable polar hellscape.

Nathan Tolley is a talented mechanic who has watched his business dry up due to gas shortages following the drastic tectonic shifts. His wife Cyndi has diligently prepped food and supplies, but it’s not enough to get them through a never-ending winter. With an asthmatic young son and a new baby on the way, they’ll have to find a safe place they can call home or risk freezing to death in this harsh new world.

After the Shift: The Complete Series includes:

Freezing Point
When an old friend of Nathan’s tells him that Detroit has become a paradise, with greenhouses full of food and plenty of solar energy for everyone, it sounds like the perfect place to escape. But with dangerous conditions and roving gangs, getting there seems like an impossible dream. It also seems like their only choice.

Killing Frost
Nathan and his family are on the run from a catastrophic polar shift - but the bitter cold is the least of their worries.

Nathan was led to believe that Detroit would be the proverbial promised land, but when his family arrives they find a city struggling just to survive in the frigid conditions.

Black Ice
Losses pile up like the snowdrifts of a never-ending winter in this post-apocalyptic series conclusion.

As circumstances continue to deteriorate like the weather, Nate turns their sights south, but the past is about to catch up to them in ways none of them will see coming. And in order to embrace an uncertain future, sacrifices must be made.

Survival of the fittest gets real - fast.