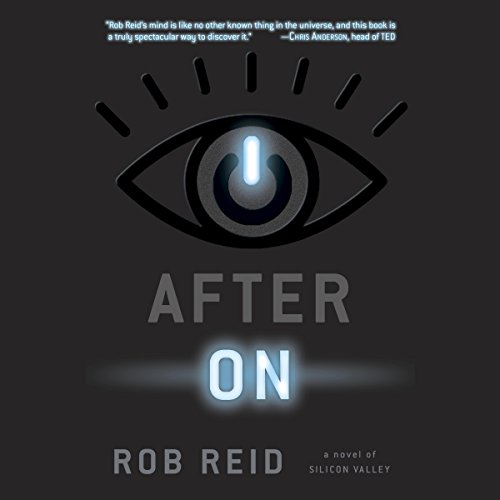 The definitive novel of today's Silicon Valley, After On flash-captures our cultural and technological moment with up-to-the-instant savvy. Matters of privacy and government intrusion, post-Tinder romance, nihilistic terrorism, artificial consciousness, synthetic biology, and much more are tackled with authority and brash playfulness by New York Times best-selling author Rob Reid.

Meet Phluttr - a diabolically addictive new social network and a villainess, heroine, enemy, and/or bestie to millions. Phluttr has ingested every fact and message ever sent to, from, and about her innumerable users. Her capabilities astound her makers - and they don't even know the tenth of it.

But what's the purpose of this stunning creation? Is it a front for something even darker and more powerful than the NSA? A bid to create a trillion-dollar market by becoming "The UberX of Sex"? Or a reckless experiment that could spawn the digital equivalent of a middle-school mean girl with enough charisma, dirt, and cunning to bend the entire planet to her will?

Phluttr has it in her to become the greatest gossip, flirt, or matchmaker in history. Or she could cure cancer, bring back Seinfeld, then start a nuclear war. Whatever she does, it's not up to us. But a motley band of Silicon Valley entrepreneurs, venture capitalists, and engineers might be able to influence her.

After On achieves the literary singularity - fusing speculative satire and astonishing reality into a sharp-witted, ferociously believable, IMAX-wide view of our digital age.

" After On is smart, hilarious, and properly cynical about our connected world. The story unfolds in surprising and fiendish ways, and while you're laughing you'll learn enough to confound a wily MBA, manipulate a board of directors, and maybe even outfox a superintelligence." (Ken Fisher, founder and editor in chief, Ars Technica)

"Rob Reid doesn't write science fiction; he writes future history. After On is the best account I've read of how superintelligence will arrive and what it will mean for all of us. Hilarious, frightening, believable, and marvelously constructed - After On has it all." (Hugh Howey, New York Times best-selling author of Wool)

"Enter a near-future Silicon Valley that is hilariously, creepily, mind-bogglingly fantastic, yet at the same time all too believable. It might turn out this way. No, really, it might! Along with After On's diabolically ingenious plot, there are crazy-plausible web startups, delicious parodies of social media, and a surprisingly convincing theory of human consciousness." (Chris Anderson, head of TED)

"Reading After On is like attending a master class in nearly every major issue haunting not only the tech industry but society itself. Only the professor is also a stand-up comic with a perfect ear for the foibles of Silicon Valley's most sacred cows. Part AI thriller, part arch social commentary, and part rollicking farce, After On will leave you smarter about just about everything the human species needs to work on if we're going to outlive our own creations - and our obsessions with them." (John Battelle, co-founder, NewCo, Federated Media, and Wired)

Seemingly to prove what Rob Reid writes about, this book was suggested to me by the Audible bot. What is surprising about this is that, albeit the setting is somewhat off my literary home turf, I was hooked instantly.

After On is a well-researched alternate history book about contemporary Silicon Valley. The author explores a set of distinct writing styles, congenially brought to life by the narrators, who also deserve a big applause for their achievement.

All in all, there is just one thing I regret about this book, namely, that I can’t listen to it again as if it were for the first time.

The plot is rich and full of surprising twists, and intellectually inspiring. “Five stars”, in the words of Henry Charles Higginsworth III.

This was the most extraordinary, most funny, most amazing, most addictive piece of literature i found in years.
It's a super high quality production with real professional actors, showing me how much we in Germany still have to learn to catch up.
One of the things making it so refreshingly much better than other stories picking up the topic of super-intelligence, is that the story turns out to be unexpected and quiet different from all the standard stories warning us about being taken over by super-AI.
Rob Reid appears to be fearless about challenging the reader with most diverse kinds of story telling and confronting him with different threads, all turning out to be harmoniously woven together.
Being thrilling and funny at the same time it can easily compete with works as Neal Stephenson's (also brilliantly entertaining) "Rise and fall of D.O.D.O"
After this book i consider Rob Reid a new sun in literature galaxy.