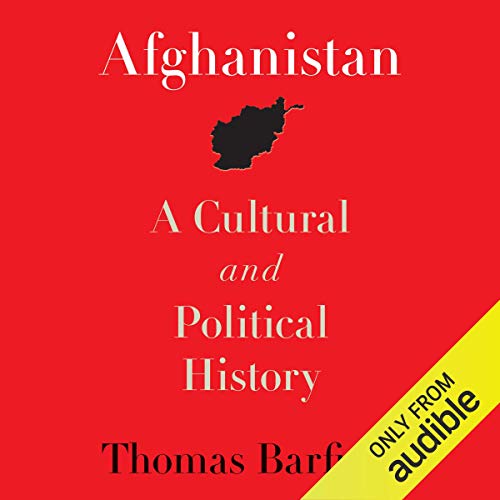 Afghanistan traces the historic struggles and the changing nature of political authority in this volatile region of the world, from the Mughal Empire in the 16th century to the Taliban resurgence today. Thomas Barfield introduces listeners to the bewildering diversity of tribal and ethnic groups in Afghanistan, explaining what unites them as Afghans despite the regional, cultural, and political differences that divide them. He shows how governing these peoples was relatively easy when power was concentrated in a small dynastic elite, but how this delicate political order broke down in the 19th and 20th centuries when Afghanistan's rulers mobilized rural militias to expel first the British and later the Soviets.

Armed insurgency proved remarkably successful against the foreign occupiers, but it also undermined the Afghan government's authority and rendered the country ever more difficult to govern as time passed. Barfield vividly describes how Afghanistan's armed factions plunged the country into a civil war, giving rise to clerical rule by the Taliban and Afghanistan's isolation from the world. He examines why the American invasion in the wake of September 11 toppled the Taliban so quickly, and how this easy victory lulled the United States into falsely believing that a viable state could be built just as easily.

Afghanistan is essential listening for anyone who wants to understand how a land conquered and ruled by foreign dynasties for more than a thousand years became the "graveyard of empires" for the British and Soviets, and what the United States must do to avoid a similar fate.

"In this riveting study, Barfield does a splendid job of informing us why Afghanistan is the way it has always been." ( Daily Star)
"This book is an authoritative and well-written summary of what we might call the majority view. There is a streak in this book, however, of more radical thinking. . . . It leads him near the end of the book to some startling predictions for Afghanistan's possible futures." ( Gerard Russell Foreign Policy)
"Thomas Barfield's new book offers a remedy for Americans' pervasive ignorance of Afghanistan. . . . Afghanistan: A Cultural and Political History is an invaluable book. Mr. Barfield does not give the United States a way out of Afghanistan, but he does provide the context necessary for good policymaking." (Doug Bandow, Washington Times)

I took on this book to learn more about the country and its people and to try to understand why such hate against women and anything that is different per say. Fascinating background, well researched and the tribal world explained. At times a bit too dry and there are parts where lots gets mixed up, but the regional understanding is enhanced post this read!
It confirms so much wrong with the world powers and the arrogance that they bestowed on the local pople and region.
Tragic latest months of the country itself. It does need an up to date epilog I guess!
Hopefully Audible will allow a free edition.

An interesting story and a fantastic audiobook.

My wish for Afghanistan is and remains to see peace in Afghanistan. I liked this book.

this audiobook aims at the historically and even scientifically interested. it is comprehensive, but in its long run sometimes hard to follow. the narrator, though, does his best to keep the listener awake. although working one's way through the book will probably provide good understanding for Afghanistan's development and situation today, for the interested in more present day circumstances a shorter and more concise book may be the preferred choice.