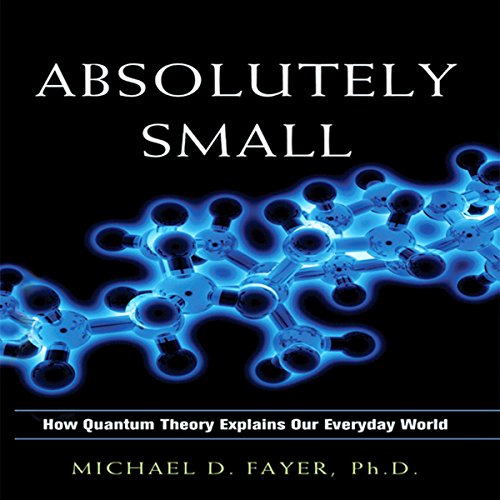 Our intuition about how things should behave is usually right in the everyday world. We see the baseball soar in the air, arc, drop, and lie stationary on the ground. Through data gathered by our senses and basic knowledge of the laws of classical mechanics, the motion of a ball makes perfect sense.But enter the world of the tiniest particles on earth—the motion of electrons, the shapes of molecules—and everything we think we know about the world radically changes. To understand what’s really happening in the world around us, to comprehend the mysterious, counterintuitive science of the small, we must take a quantum theory view of nature. Like no other book before it, Absolutely Small makes the inherently challenging field of quantum theory understandable to nonscientists, without oversimplifying and without bogging down in complicated math.

Written by an award-winning professor at Stanford University, the book uses clear explanations and real-world examples instead of dense equations to help you understand:

In the tradition of Stephen Hawking and Lewis Thomas, but without the rigorous mathematical requirements, Absolutely Small demystifies the fascinating realm of quantum physics and chemistry, complete with compelling accounts of the scientists and experiments that helped form our current understanding of quantum matter.

“There are a few books that I always keep near at hand, and constantly come back to. The Feynman Lectures on Physics and Dirac’s classic textbook on quantum mechanics are among them. Michael Fayer’s wonderful new book, Absolutely Small, is about to join them. Whether you are a scientist or just curious about how the world works, this is the book for you.” (Leonard Susskind, Professor of Physics, Stanford University; author of The Black Hole War: My Battle With Stephen Hawking to Make the World Safe for Quantum Mechanics )