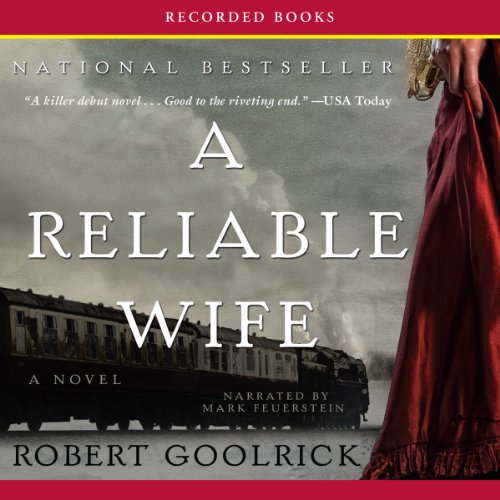 When glossy-haired Catherine Land, his young wife-to-be, slips off the train, she collapses Ralph with her unexpected beauty and stillness. Ralph, in turn, shatters Catherine with his growly security and kindness. Each is deceiving the other. Tony Moretti, Ralph's ruthless estranged son, eventually sinks their schemes. A Reliable Wife is Gothic suspense, so secrets leak, blood spills, arsenic drips, and past wrongs are avenged.

Novelist Robert Goolrick knots chilling plot twists with ruined characters. Brittle Catherine buries her depraved adulthood by cloning the "manners of her fellow travelers exactly", down to cleaning her own hairbrush so maids will remark on her good breeding. She holes up in public libraries and steams through encyclopedias and card catalogs, collecting facts for her reinvention as a virginal missionary's daughter. Ralph punishes his roaring sensuality with ice water and listless dinner parties. He is a joyless grind. Love, meanwhile, bores Tony with its "lack of event...the same steady heartbeat".

Mark Feuerstein narrates A Reliable Wife in hypnotic murmurs to resist competing with Goolrick's lush, poetic language and explicit sexual dialogue. He bundles his velvety reading voice into a steady purr, lulling and tranquilizing against overwrought subtexts of hysteria. Feuerstein is unhurried, though never halting. He chronicles Catherine and Ralph's broken tangle with unadorned inflections and conspiratorial silences. Feuerstein invests his characters with authentic hearts, even if they, themselves, are not in true possession of one. Nita Rao

Robert Goolrick's riveting debut novel is both foreboding and sensual. When a wealthy man first meets his mail-order bride in 1907, he realizes this statuesque beauty is anything but a "simple missionary's daughter." But he doesn't know of her devious plan to leave Wisconsin as a rich widow. Nor does she know of the furious demons he longs to unleash during the lonely months of snowbound isolation.
©2009 Robert Goolrick (P)2009 Recorded Books, LLC
Historische Romane Thriller
Mehr anzeigen Weniger anzeigen

"A sublime murder ballad that doesn't turn out at all the way one might expect." ( Kirkus Reviews)
"This darkly nuanced psychological tale builds to a strong and satisfying close." ( Publishers Weekly)