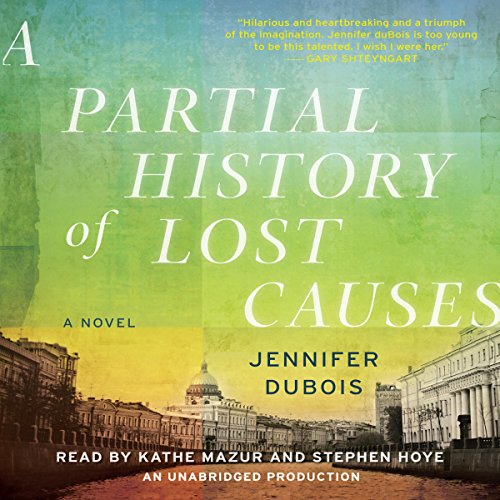 A Partial History of Lost Causes

A Partial History of Lost Causes

In St. Petersburg, Russia, world chess champion Aleksandr Bezetov begins a quixotic quest. With his renowned Cold War–era tournaments behind him, Aleksandr has turned to politics, launching a dissident presidential campaign against Vladimir Putin. He knows he will not win - and that he is risking his life in the process - but a deeper conviction propels him forward. And in the same way that he cannot abandon his aims, he cannot erase the memory of a mysterious woman he loved in his youth.

In Cambridge, Massachusetts, 30-year-old English lecturer Irina Ellison is on an improbable quest of her own. Certain she has inherited Huntington’s disease - the same cruel illness that ended her father’s life - she struggles with a sense of purpose.

When Irina finds an old, photocopied letter her father had written to the young Aleksandr Bezetov, she makes a fateful decision. Her father had asked the Soviet chess prodigy a profound question - How does one proceed against a lost cause? - but never received an adequate reply. Leaving everything behind, Irina travels to Russia to find Bezetov and get an answer for her father, and for herself.

Spanning two continents and the dramatic sweep of contemporary history, A Partial History of Lost Causes reveals the stubbornness and splendor of the human will even in the most trying times. With uncommon perception and wit, Jennifer duBois explores the power of memory, the depths of human courage, and the endurance of love.

“Hilarious and heartbreaking and a triumph of the imagination. Jennifer duBois is too young to be this talented. I wish I were her.” (Gary Shteyngart)
“An amazing achievement - a braiding of historical, political, and personal, each strand illuminating the other. Wonderful characters, elusive glimpses of wisdom, and a gripping story that accelerates to just the right ending.” (Arthur Phillips)
“Thrilling, thoughtful, strange, gorgeous, political, and deeply personal, Jennifer duBois’s A Partial History of Lost Causes is a terrific debut novel. In prose both brainy and beautiful, she follows her characters as they struggle to save each other. This is a book to get lost in.” (Elizabeth McCracken)