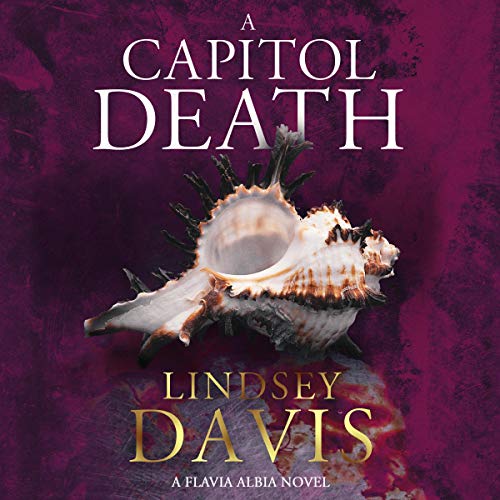 The next book in the gripping Flavia Albia series, by acclaimed author Lindsey Davis.

A tragic accident...or was it?

Emperor Domitian has been awarded (or rather, has demanded) yet another Triumph to celebrate two so-called victories. Preparations are going smoothly until one of the men overseeing arrangements for the celebration accidentally falls to his death from a cliff on the symbolic Capitoline Hill.

But an old woman comes forward, insisting that the man was in fact pushed - and she refuses to leave it alone. Tiberius is soon dragged in to find out what really happened and swiftly passes the job to Flavia Albia.

Flavia suspects there's more to the incident than meets the eye, as there are plenty of people who would have been delighted to be rid of the overseer. He was an abusive swine who couldn't organise a booze-up in a winery and was caught up in a number of scams, including one surrounding the supply of imperial purple dye and a family of shellfish-boilers.

As Flavia finds herself drawn into a theatrical world of carnival floats, musicians, incense and sacrificial beasts, can she see to the heart of the matter and catch those responsible for the unpopular man's untimely death?

Praise for Lindsey Davis and the Flavia Albia series: "Lindsey Davis has seen off all her competitors to become the unassailable market leader in the 'crime in Ancient Rome' genre... Davis's squalid, vibrant Rome is as pleasurable as ever." (The Guardian)

"Davis's prose is a lively joy, and Flavia's Rome is sinister and gloriously real." (The Times on Sunday)

"For fans of crime fiction set in the ancient world, this one is not to be missed." (Booklist)