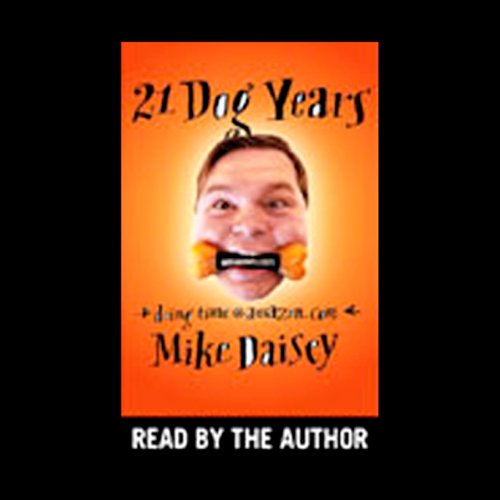 Mike Daisey worked at Amazon.com for nearly two years during the dot-com frenzy of the late nineties. Now that his nondisclosure agreement has expired, he can tell the real story - one that blends tech culture, hero worship, cat litter, Albanian economics, and venture capitalism into a surreal cocktail of delusion.

In 1998, when Amazon.com went to temp agencies to recruit people, they gave them a simple directive: send us your freaks. Thus began Mike Daisey's love affair with this quintessential dot-com. His ascent from lowly temp to customer service representative to business development hustler is the stuff of dreams - and nightmares. Daisey takes us from Amazon's high point, when the stock traded at $361, to well into its rollercoaster plunge to today's humble two-digit price, all the while reflecting on the very nature of the new economy and the darkly humorous compromises made every day to survive in corporate America. At strategic intervals, the narrative is punctuated by hysterical (in every sense of the word) letters to Amazon CEO Jeff Bezos - missives that seem ripped from the collective unconscious of dot-com disciples the world over. No wonder Newsweek has dubbed Daisey the "oracle of the bust."

With a hugely popular website and a hit one-man show that has received phenomenal coverage (with stories in Wired, Newsweek, Salon, and elsewhere), Daisey has become the bard of the dot-com boom-and-bust - a smart, imaginative, and acutely perceptive chronicler of our times.

The Free Press, a division of Simon & Schuster, is the original publisher of 21 Dog Years in hardcover.

"A modern Dickensian fable of pointless toil inside an industrial madhouse. Too funny not to be accurate, too heartbreaking not to be true. If you are wondering where all the time and money went, this book has the answers." (Walter Kirn, author of Up in the Air)