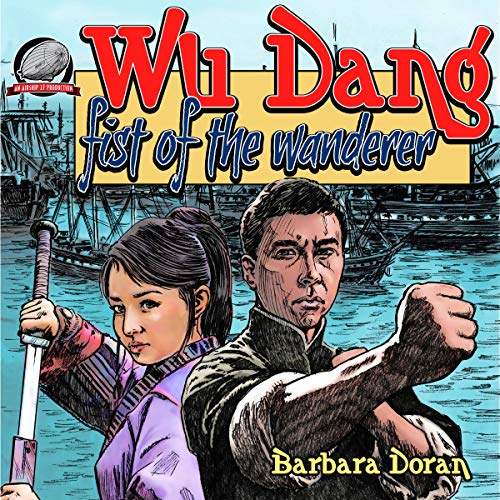 Wu Dang: Fist of the Wanderer

Shanghai, 1848. Chinese martial arts master Yi Xiao is summoned before his grandmother Madam Lang. His lookalike cousin Yi Zhu is next in line to the throne and must reach his dying father to rightfully claim the title of emperor. But an army of assassins is on the hunt for the prince. It is Madam Lang’s plan to convince them Yi Xiao is the royal heir and have him flee the country; destination San Francisco.

And so Xiao embarks on his journey aboard an American schooner piloted by a Captain Burton. But before setting out, he is discovered by a lovely young girl named Gan Han who knows his true identity. She is a master of her family’s Lotus Blossom fighting technique and is obsessed with fighting Xiao to prove its superiority over his own style. In the end, he is forced to bring her along, though he adamantly refuses to fight with her. All Xiao seeks is spiritual contentment in achieving his Dao.

Once again, Barbara Doran weaves a fanciful adventure merging two different cultures against a unique moment in American history. It is an adventure filled with danger, comedy, and magic you won’t soon forget.