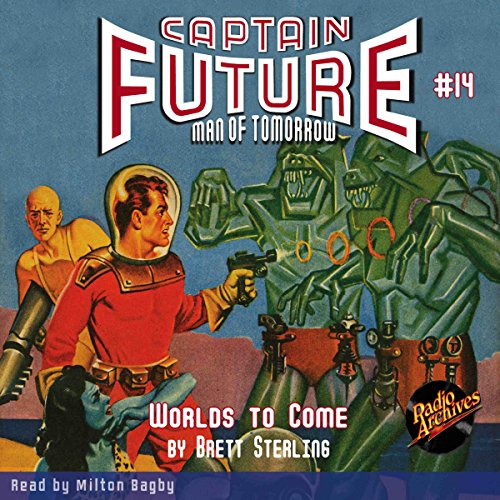 Captain Future and his valiant aides speed to the rescue of the Sagittarian system - ready to lock in mortal combat with deadly enemies from another dimension!

Edmond Hamilton is credited by many as the creator and writer of Captain Future. Although he is most responsible for nearly everything in the Captain Future tales, the idea was originally presented to him by science fiction editor Mort Weisinger. Also, Hamilton did pen the majority of the stories, but Joseph Samachson also wrote two Captain Future stories and Manly Wade Wellman wrote one. Five of the Captain Future tales carry the byline "Brett Sterling", which was a housename used for a while that both Hamilton and Samachson wrote under.

The Captain Future stories were not only populated with magnificent characters, but they were also set in a wild, imaginative, almost psychedelic universe. Edmond Hamilton built worlds and star systems that in many ways completely disregarded what the public knew to be true about outer space, but they did not care. Nearly every planet in our solar system could support life and danger lurked there, too. Although the original stories took place amongst familiar planets, at least by name, Hamilton would take readers far beyond anything familiar in later tales

Rocket into science fiction adventure and discover new worlds. Ripped from the pages of the spring 1943 issue of Captain Future magazine, Worlds to Come is read with wonder and excitement by Milton Bagby.