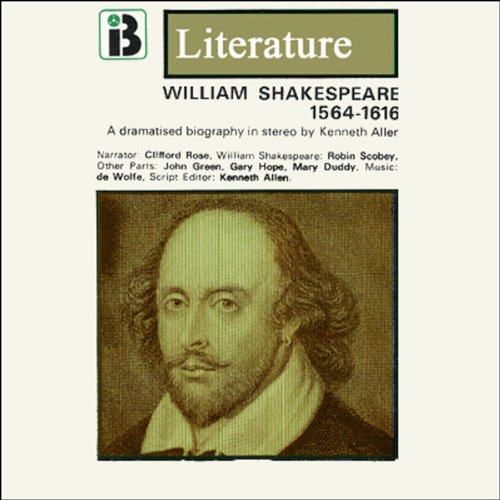 In Kenneth Allen’s dramatization William Shakespeare, the life of the greatest playwright who lived takes the center stage.

We first encounter young Shakespeare leaving his family in Stratford for London. Soon he is invited to join the Rose theater, which was one of London’s first covered theaters. The listener sees the young Bard befriending the local actors and directors in the 16th century London and then creating the plays and poems which have made him an immortal on the page.

This entertaining, enlightening dramatization skillfully mixes narration with dramatic recreations of Shakespeare’s early interactions in London and performances of scenes from his plays.

Shakespeare lived for only 52 years, yet enriched the English language with an astonishing number of literary masterpieces. This dramatisation tells the story of Shakespeare's life in the boisterous days of the ageing Queen Elizabeth and the early years of her successor, James the First. It covers most of the known facts of his life and presents the man as well as the poet and dramatist.
©1975 Kenneth Allen (P)1975 Ivan & Inge Berg
Unterhaltung & Stars
Mehr anzeigen Weniger anzeigen