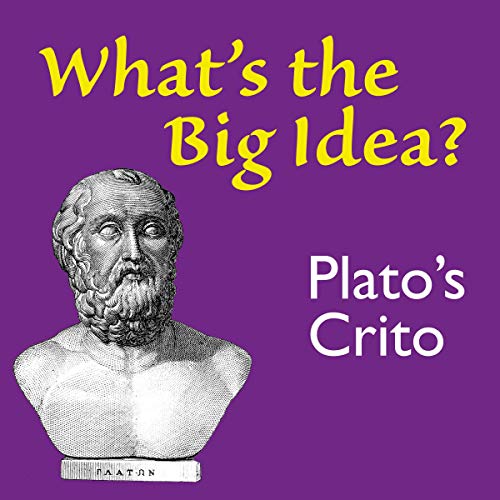 What's the big idea? To Socrates, an act of injustice cannot be answered with another unjust act.

Plato's Crito is a dialogue between an imprisoned Socrates and Crito, a wealthy Athenian who has formulated and financed a plan for Socrates to escape and live in exile.

Socrates had been put on trial and was convicted of impiety and corrupting youth, resulting in a sentence of death. That famous trial was the subject of Plato's Apology, which is also available as a What's the Big Idea? Kindle and audiobook. In this dialogue, Crito visits Socrates in prison and explains why Socrates must escape with him to freedom. Socrates answers each of Crito's arguments, telling him why he has to remain in prison and await his fate.

Born in 469 B.C., Socrates was the son of an Athenian sculptor and a midwife. A modest inheritance allowed him to abandon the stone carver's trade and devote himself to a search for truth and virtue.

Wandering around the Athenian marketplace, workshops, and gymnasiums, he would question people he met, starting with a subject he would claim he didn't understand, such as what it meant to be pious. He would then delve deeper with more questions, refining their answers with more questions until it was shown that the recipient of one of these Socratic examinations really knew nothing or held contradictory beliefs.

Some were enchanted by Socrates' genius and his philosophical endeavors. He had a circle of adoring followers, a few of whom, like Crito, were wealthy.

Others were outraged. In 399 B.C., 71-year-old Socrates was put on trial for corrupting the youth of Athens and introducing new gods. A jury of 500 his fellow Athenians found the old man guilty and condemned him to death.