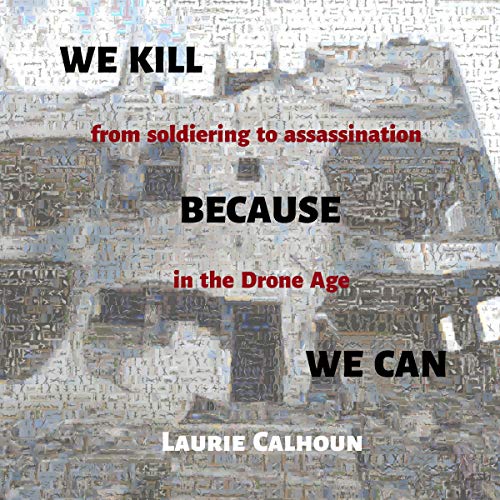 We Kill Because We Can: From Soldiering to Assassination in the Drone Age

We Kill Because We Can: From Soldiering to Assassination in the Drone Age

"Last resort has become first resort. Courage has become cowardice. Black ops have become standard operating procedure. An intelligence agency is now a killing machine. Self-defense has become naked aggression. Guilt beyond a reasonable doubt has become possible future potential for guilt. Voices of dissent have been irrevocably silenced. Patriots have been replaced by mercenaries. Human rights have been eclipsed by concern with the protection of soldiers’ lives. The US war on terrorism has been carried out using terrorist tactics, with formal military states emulating asymmetrical factional killers. Wars of necessity have been supplanted by ever-proliferating wars of choice."

In We Kill Because We Can: From Soldiering to Assassination in the Drone Age, Laurie Calhoun examines the 21st-century practice of remote-control killing of suspects located in third-world countries and challenges listeners to reflect upon the long-range implications - moral, political, psychological, and cultural - of this new form of "warfare". Through the use of provocative analogies and examples, We Kill Because We Can clarifies and criticizes targeted killing as incompatible with the values and principles of modern Western democratic societies.

Part III: Finish
Chapter 9: Death and Politics
Chapter 10: Death and Taxes
Chapter 11: The Death of Military Virtue
Chapter 12: Tyrants Are as Tyrants Do

Note: An audiobook supplement containing all notes and reference sources is provided in PDF format.