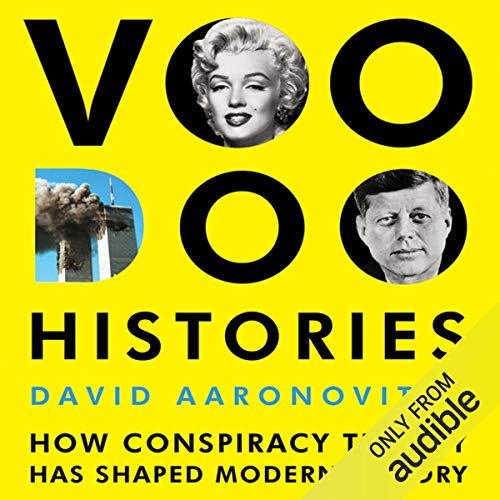 Our age is obsessed by the idea of conspiracy. We see it everywhere - from Pearl Harbor to 9/11, from the assassination of Kennedy to the death of Diana. In this age of terrorism we live in, the role of conspiracy is a serious one - one that can fuel radical or fringe elements to violence.

For award-winning journalist David Aaronovitch, there came a time when he started to see a pattern among these inflammatory theories. He found that these theories used similarly murky methods with which to insinuate their claims: they linked themselves to the supposed conspiracies of the past ("it happened then so it can happen now"); they carefully manipulated their evidence to hide its holes; and they relied on the authority of dubious academic sources. Most important, they elevated their believers to membership of an elite - a group of people able to see beyond lies to a higher reality. But why believe something that entails stretching the bounds of probability so far? Surely it is more likely that men did actually land on the moon in 1969 than that thousands of people were enlisted to fabricate an elaborate hoax.

In this entertaining and enlightening book - aimed at providing ammunition for those who have found themselves at the wrong end of a conversation about moon landings or the twin towers - Aaronovitch carefully probes and explodes a dozen of the major conspiracy theories. In doing so, he examines why people believe them and makes an argument for a true skepticism - one based on a thorough knowledge of history and a strong dose of common sense.

"Leaves us in no doubt that arriving at the truth is a vital matter – at times a matter of life and death." ( Financial Times)
"Deconstructs a dizzying array of conspiracy theories in this pages with unsparing logic common sense and at times exasperated wit." (Michiko Kakutani, New York Times)