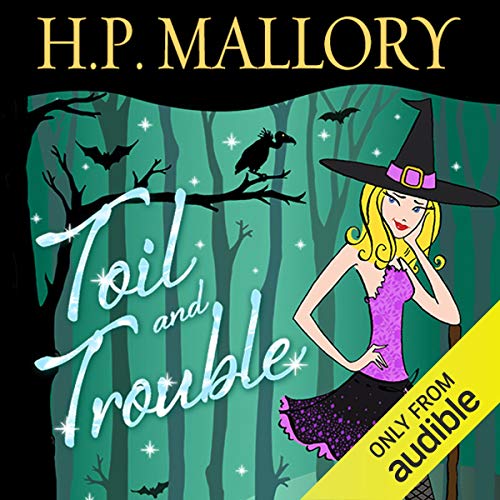 Toil and Trouble is the second book in H. P. Mallory's dramatic and imaginative Jolie Wilkins series. Who is Jolie Wilkins? Only a witch who can bring people back from the dead and one of the most sought-after players in the warring Underworld. While she battles the forces of evil, she also has to contend with being part of a love triangle involving her warlock boss and a sexy vampire.

Listeners may recognize the cultivated voice of Allyson Ryan who has performed over 50 audiobooks and earned an Audiofile Earphones Award for narration. Her interpretation of Mallory's novel is so emotionally genuine and resonant that a listener almost forgets this paranormal world isn't real.

If you like your books steamy (this is a paranormal romance series for adults, not for kids or teens!) and you appreciate a good witch, warlock and vampire romance triangle, listen on! Toil And Trouble is the second book in the Jolie Wilkins series (witch romance books). The Underworld in civil war. The cause? A witch who can reanimate the dead. A sexy as sin vampire determined to claim her. An infuriatingly handsome warlock torn between duty and love. Who says blonds have more fun?

After defending herself against fairy magic, Jolie Wilkins wakes to find her world turned upside down - the creatures of the Underworld on the precipice of war. The Underworld is polarized in a battle of witch against witch, creature against creature, led by the villainous Bella, who would be Queen.

While Jolie has one goal in mind - to stake the vampire who nearly killed her - she also must choose between the affections of her warlock employer, Rand, and the mysteriously sexy vampire, Sinjin. And as if that weren’t enough to ruin a girl’s day, everything Jolie knows will be turned inside out when she’s thrust into the shock of a lifetime.