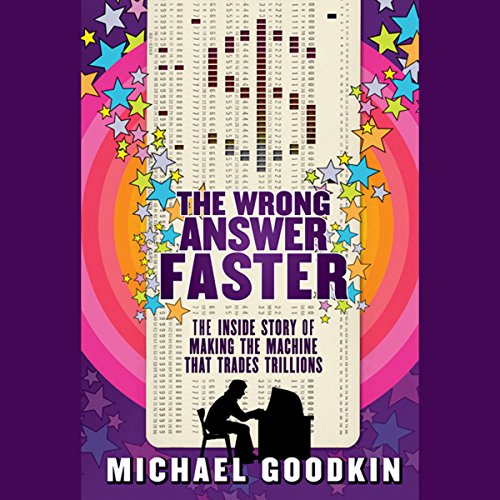 The fascinating story behind the machines that trade trillions of dollars every day... In 1968, Michael Goodkin is about to graduate from Columbia University. While his classmates interview for jobs, he daydreams of seeing the world as a man of independent means. Noticing that there are no computers on Wall Street and drawing on his experiences as a failed teenage investor and successful gambler, he has an epiphany: Since no one knows the right price for anything, the only way to beat the market is to make a computer that comes up with the wrong answer faster than the professionals.

And thus begins a journey that takes this provincial Midwesterner from nearly broke to opulent Park Avenue. The Wrong Answer Faster is the story of unintended consequences: how a technique originally created to minimize market risk spiraled into a multi-trillion dollar game with unparalleled risks.

Having founded and sold a firm that changed the world, Goodkin left New York to travel and play backgammon only to return to found another groundbreaking firm, Numerix, a software company that substituted computational physics for econometrics to better manage derivative risk.

This is the story of the computerization of Wall Street by the man at the helm. Packed with keen insights, based almost entirely on poker, backgammon, and game theory, Goodkin's unique insight to the markets is that everyone has the wrong answers. The solution is not to try to beat the market but to come up with the wrong answers faster.

The epic tale of the untold story how one man with a great idea decided not to play the market but to revolutionize the financial world for generations to come by creating the most groundbreaking tool for market players since the ticker tape.

"A bildungsroman, one jacket blurb calls this book - and sure, its a traditional coming-of-age tale. But the story itself is anything but conventional. The pleasures of the book lie in the story of their bumpy path to success." (Canadian Business)