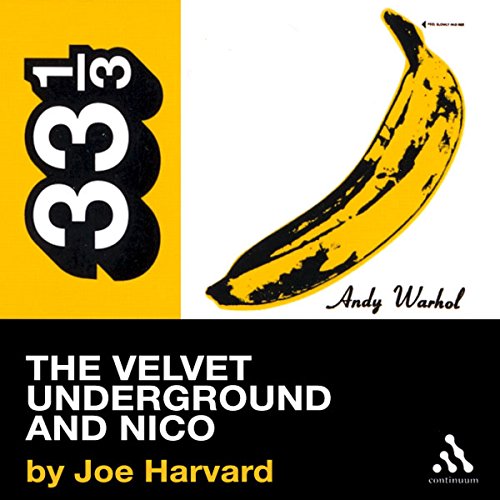 Joe Harvard describes himself as a musician, not a music critic, and as such he doesn't attempt to "explain" one of the most influential albums in the history of rock. Instead, through interviews and careful research he paints a portrait of the Velvet Underground's debut album, the people that made it, and the downtown NY that it sprung out of and in many ways defined. Harvard talks about singer and lyricist Lou Reed's desire to write a musical equivalent of the writing of Raymond Chandler; Marc Vietor's performance of the audiobook feels like the reading of a Chandler pulp fiction. His gritty delivery evokes the sex and drugs that the album describes with a candor which perhaps mainstream audiences at the time were not ready for.

In 1966, studios were still more about science than art. Clients who dared make technical suggestions were treated with bemusement, derision or hostility. The Velvets were a young band under constant critical attack, and the pressure to confirm in order to gain acceptance must have been tremendous. Most bands of that era compromised with their record companies, through wholesale revamping of their image, changing or omitting lyrics, creating drastically edited versions for radio airplay, or eliminating songs entirely from their sets and records. With Andy Warhol in the band's corner, such threats were minimized.

The Velvet Underground and Nico has influenced the sound of more bands than almost any other album. And remarkably, it still sounds as fresh and challenging today as it did upon its release in 1967.

In this book, Joe Harvard covers everything from Lou Reed's lyrical genius to John Cale's groundbreaking instrumentation, and from the creative input of Andy Warhol to the fine details of the recording process. With input from co-producer Norman Dolph and Velvets fan Jonathan Richman, Harvard documents the creation of a record which, in the eyes of many, has never been matched.

33 1/3 is a new series of short books about critically acclaimed and much-loved albums of the last 40 years. Focusing on one album rather than an artist's entire output, the books dispense with the standard biographical background that fans know already, and cut to the heart of the music on each album. By turns obsessive, passionate, creative, and informed, the books in this series demonstrate many different ways of writing about music.

"'Today, the kind of lives deemed permissible for art to reflect upon seem more and more to resemble those that the Velvets explored in their songs,'" writes Joe Harvard, assessing the milieus surrounding the Velvet Underground's debut, virtually ignored upon release in 1967 and now considered a watershed statement. A Boston producer, Harvard brings a musician's perspective to evaluating song structures, album sonics and band chemistry, while balanced views on Nico and Andy Warhol's roles reinforce the record's cultural impact." ( The Chicago Tribune)