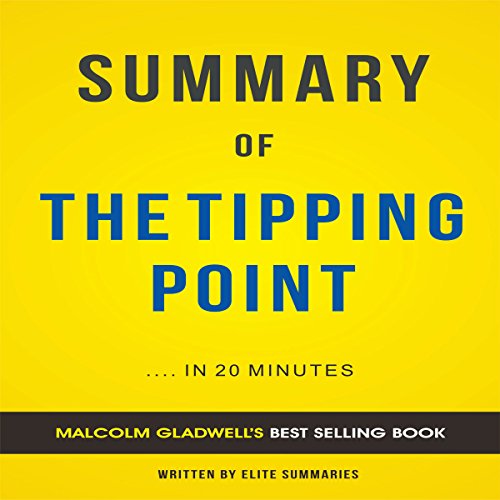 A smarter you in 15 minutes. What is your time worth?

How Little Things Can Make a Big Difference is a debut audiobook by Malcolm Gladwell that defines a tipping point as "the moment of critical mass, the threshold, the boiling point." The audiobook seeks to go into detail and describe the "mysterious" sociological changes that mark everyday activities. Gladwell states that, "Ideas and products and messages and behaviors spread like viruses do."

The Law of the Few by Malcolm Gladwell also states that, "The success of any social epidemic is heavily dependent upon the involvement of an individual with a particular and rare group of social gifts." For Malcolm Gladwell, economists label this the 80/20 Principle, which could be the idea, that in every situation roughly 80 percent of the work are going to be done by 20 percent with the participants". These people are described in the following ways:

Connectors will be the population in every community who know large numbers of men and women, and who are in the habit of making introductions. They usually know people across numerous social, cultural, professional, and economic circles, and create a habit of introducing those who work, or are in different circles.

Salespersons are "persuaders" - those with charismatic and powerful negotiation skills. They tend on an indefinable trait that goes beyond the things they say, making others desire to agree with them.

The Stickiness Factor - A specific content of a message that renders its impact unforgettable. Popular children's television programs, including Sesame Street and Blue's Clues, pioneered the properties in the stickiness factor, thus enhancing effective retention of educational content, and also, entertainment value.

The power of context in human behavior is to understand, and strongly depend on its environment.