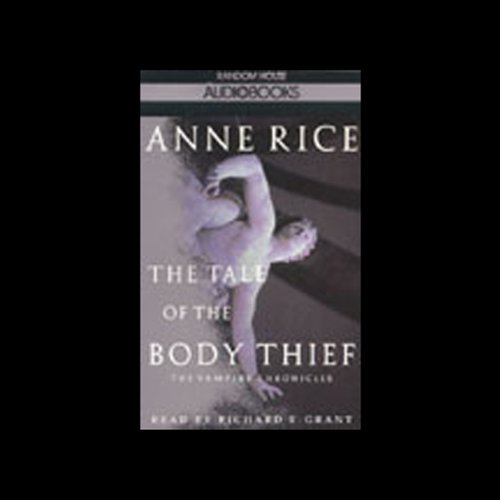 The Tale of the Body Thief

From the best selling Vampire Chronicles, that began with Interview with the Vampire and continued with The Vampire Lestat and The Queen of the Damned, comes The Tale of the Body Thief.

Lestat speaks. Vampire-hero, enchanter, seducer of mortals. For centuries he has been a courted prince in the dark and flourishing universe of the living dead. But now his covens are scattered. Lestat is alone. In his overwhelming need to destroy his doubts and his loneliness, he embarks on the most dangerous enterprise he has ever undertaken in all the danger-haunted years of his long existence.

The Tale of the Body Thief is told with the mesmerizing passion, power, color, and invention that distinguish the extraordinary novels of Anne Rice.

The Tale of the Body Thief is Volume 4 of The Vampire Chronicles. For a full selection of Anne Rice programs available at audible.com and to hear the author answering fan mail, visit the Anne Rice store.