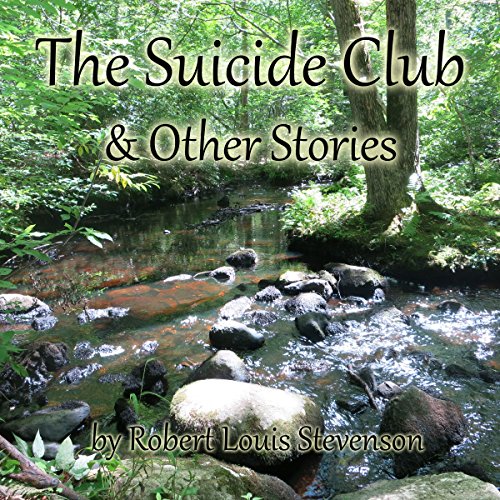 The Suicide Club & Other Stories

Robert Louis Stevenson’s foray into detective fiction includes three stories, each enjoyable in its own right, but nevertheless combining to form a single intrigue. Bohemian Prince Florizel and his sidekick, Colonel Geradine, discover a secret society of people seemingly intent on killing themselves. Through London and Paris, Florizel winnows his way into the innermost circle of the Suicide Club. Actor Jim Killavey regales listeners with tales of murder, smuggling rings, and a duel to the death. Killavey’s fluid, fast-paced delivery is well suited to these action-packed exploits, which combine the investigative genius of Sherlock Holmes with Stevenson’s trademark mastery of globetrotting adventure.

Three interrelated stories make up the plot of The Suicide Club. They each stand on their own, but there is an overall plot that brings them together. It centers around the hero, Prince Florizel of Bohemia. He attempts to solve the mystery of a strange club that turns out to have a very different purpose than its name suggests.

The three stories in the trilogy are: "Story of the Young Man with the Cream Tarts", "Story of the Physician and the Saratoga Trunk", and "The Adventure of the Hansom Cab". Also included are dramatized versions of two of Stevenson's most famous short stories: "Markheim" and "The Sire de Maletroit's Door".