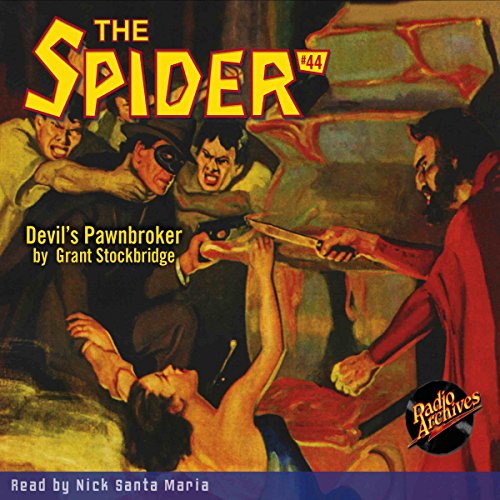 Deep-hidden in evil, Satan's Suicide Club sat in council - and men died. What dreadful force drove these men, leaders of society with everything to live for, to end their lives at the behest of that sinister being who sardonically called himself Professor Mephisto? And why did men and women suffer the tortures of the damned, rather than defy this mysterious being? Richard Wentworth once more assumes the cloak of the Spider to free these lost ones from a living hell and a disgraceful death - and steps into the jaws of a devil's trap that casts his life among the lives in pawn!

In a letter to a Spider fan, Author Norvell W. Page once wrote, "Think of me as Wentworth, if you will. The line between us is not too distinct."

A transplanted Virginian, Norvell. W. Page took Spider readers on a roller-coaster ride of wild action and fevered emotion, unlike anything ever published. Once he got going, he painted a portrait of a tortured superhero, one more emblematic of the 21st century than of the Great Depression. For Richard Wentworth saw himself as a man on a holy mission, a self-appointed messiah with a martyr complex.

Norvell W. Page's mark on The Spider as a messiah-like figure would remain, even in his absence. While other authors, such as Emile C. Tepperman, thrust Wentworth into adventure after adventure. Although each writer brought his own style to the tales, all had to work with the madness and panicked-pacing Page had infused into the character for all time.

Nick Santa Maria again takes on the dual role of Richard Wentworth, aka the Spider, Master of Men, for this powerful story, Devil's Pawnbroker. Originally published in The Spider magazine, May, 1937.