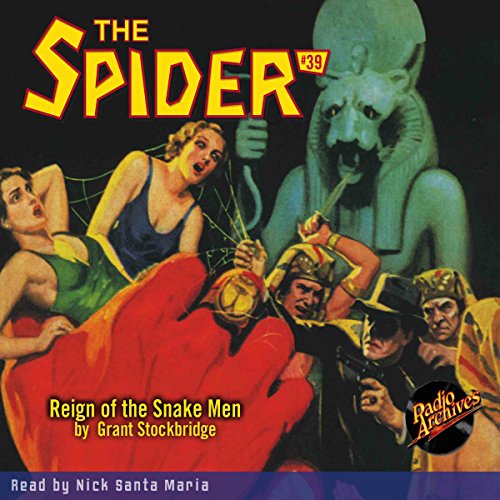 Up from the Devil's Coast swarmed a hooded horde, rioting to lay America under The Cobra's bondage. A frenzied, living Pharaoh raked Manhattan with madness and murder. Against a baffling human wall that dies but never betrays its menacing master, Richard Wentworth - feared Spider of the underworld - faces his fate alone.

The most compelling of the classic pulp heroes, Richard Wentworth had a fiancé, a coterie of equally committed aides, and a tense relationship with New York Police Commissioner Stanley Kirkpatrick, Wentworth's best friend, but also a dedicated lawman sworn to send the Spider to the electric chair - no matter who he turns out to be.

These riveting stories ran the gamut of incendiary thrillers to ultra-violent showdowns between an obsessed superhero and his depraved arch-foes. Manhattan is the backdrop for Wentworth's apocalyptic adventures. A new skyline has arisen over the penthouses, nightclubs, breadlines, and ghettos of the Big Apple. With the repeal of Prohibition, wealthy gangsters are in search for new rackets. And standing ready to keep them in check, the dreaded Spider.

The stories plunge along head-first aboard an emotional roller-coaster, with scarcely a moment's pause for respite. Oriental death-traps, treacherously alluring women, and rabid, machine-gun toting gangsters are all part of a typical day for the hero; Wentworth is frequently suspected of being the dreaded Spider, his home is periodically destroyed, his servants and friends tortured. Everything Richard Wentworth holds dear is constantly at risk, yet he fights on as The Spider.

Nick Santa Maria once again brings the Spider to life in "Reign of the Snake Men." Originally published in The Spider magazine, December, 1936.