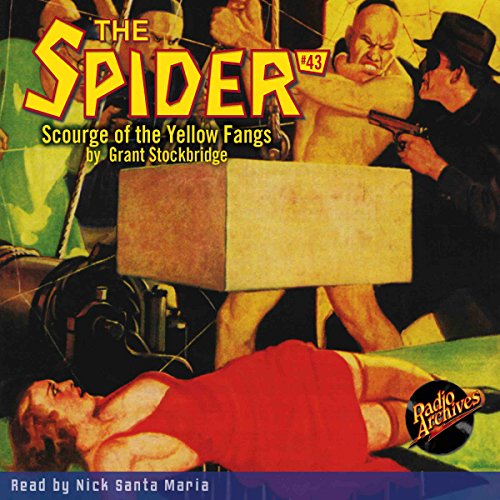 War gongs clanged in Chinatown - but it was no tong war that tore the great Societies with fear, and suspicion, and deadly hate. For deeper in evil mystery than their own dark secrets, lay the hidden temple of crime, that loosed the Scourge of the Yellow Fangs - the menace that erupted in the yellow men's haunts, and overflowed into white men's lives, and threatened white men's rule. Victims lived long enough to curse the unknown Man from Singapore - who knew the Spider and planned his quick removal from the finish fight. While in a tenuous truce with baffled police, Richard Wentworth, by night the Spider, accepted the top-heavy odds - and gave grim battle!

The Spider was the champion of oppressed humanity, its shield and protector against the murderous outbreaks of the Underworld; wherever crime struck terribly, that way he hastened, taking up the challenge. The police had offered rewards totaling thousands of dollars for his capture, dead or alive. And the Underworld hated him, and plotted his destruction with a fierceness bred of abject terror.

But the Spider was indifferent alike to proscription by the Underworld, and dogged persecution by police. Evading their bullets and traps, he continued to fight his thankless battle as humanity's paladin.

The Spider seemed to rejoice in being outnumbered by impossible odds. Captured by maniacs and madmen regularly, Wentworth shrugged off the mood of black despair, which often came over him when defeat seemed imminent.

Nick Santa Maria reads Scourge of the Yellow Fangs with the crackling intensity you have come to expect of his superb talent. Originally published in The Spider magazine, April, 1937.