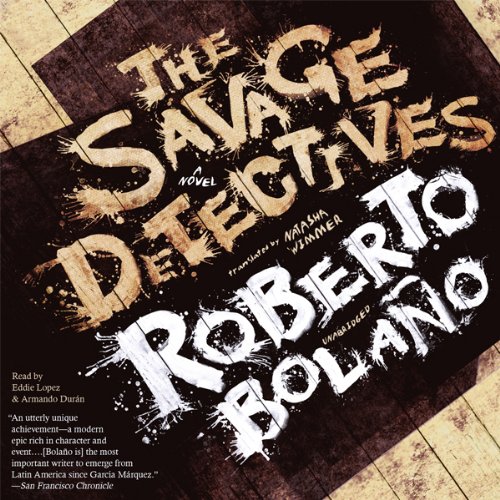 A history of Mexican "Visceral Realism" poetry? First-person accounts of the wild, promiscuous literary world of the 1970s? Or maybe it's simply a high-minded travelogue, stopping off in places like Mexico City, Paris, Barcelona, Vienna, Tel Aviv, Angola, and Liberia? Or is it a post-modern mystery? Or perhaps just a long, drawn-out, sometimes-riveting, other-times-maddening practical joke?

Confused? Exhilarated? A little of both? Welcome to the world of Roberto Bolaño, the late, great Chilean novelist whose popularity continues to rise despite his untimely death in 2003 at the age of 50.

For many Bolaño fans, especially in this country, all the excitement started here with The Savage Detectives, a sprawling, sexy, melancholy, kinetic, kaleidoscopic frenzy that clocks in at over 27 hours. First off, this is not a detective book. So if you're looking for a straightforward whodunit, look elsewhere. The only detective here is the listener, who must carefully follow along as Bolaño's novel takes one unlikely twist and turn after another.

Fans of Haruki Murakami and Thomas Pynchon will love Bolaño's literary acrobatics. On a literal level, The Savage Detectives is simply a series of first-person monologues delivered by dozens of different people. At first, the novel's focus seems unclear. But gradually, the plot begins to revolve around two "poets" (although some characters say they're nothing more than glorified drug dealers) who revive a branch of poetry called Visceral Realism: Ulises Lima and Arturo Belano, who may (or may not) be the author's adventurous alter ego. Some characters know both men well. Others have brief encounters with them that last only days or hours. Some characters love or revere them. Others dismiss them as crackpots or lunatics. This multi-faceted narrative paints a vivid portrait of both men. And yet, the more we learn about them, the more mysterious they become.

The audiobook (with text translated from Spanish into English) features two readers. Eddie Lopez performs the part of a precocious college student who initially appears to be the novel's sole narrator. But roughly a quarter of the way into the book, Armando Durán brings to life a choir of voices spanning several decades and continents. Durán deserves a gold medal for this amazing feat, making each monologue sound distinct and believable, no matter the accent, age, gender, or mood of the speaker.

Getting into the chaotic rhythm of The Savage Detectives may take some time to adjust to for some listeners. But once you're tuned in, you'll experience one of the most thrilling, satisfying literary rides of your life. Ken Ross

The late Chilean writer Roberto Bolaño has been called the García Marquez of his generation. The Savage Detectives is a hilarious and sexy, meandering and melancholy, companionable and complicated road trip through Mexico City, Barcelona, Israel, Liberia, and finally the desert of northern Mexico. It is the first of Bolaño's two giant works, with 2666, to be translated into English and is already being hailed as a masterpiece.
©2007 Translation by Natasha Wimmer (P)2009 Blackstone Audio, Inc.
Politik
Mehr anzeigen Weniger anzeigen