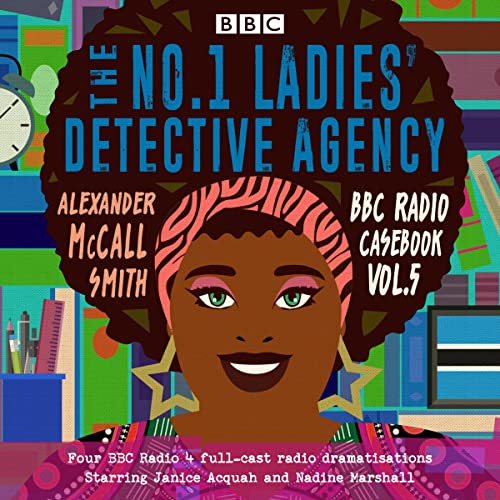 The fifth and final collection of BBC Radio 4 dramatisations, adapted by Alexander McCall Smith from his own best-selling books.

Botswana's best - and only - lady detective, Precious Ramotswe, returns for one last time to solve some surprising and challenging cases, aided as ever by the invaluable Mma Makutsi (and copious cups of red bush tea...).

The first two-part story, The Fat Cattle Club and Precious and Grace, sees Mma Ramotswe and her dauntless co-director tasked by a Canadian lady, Susan Peters, to find her childhood home and her old nursemaid, Rosie. They must also extricate Mr Polopetsi from a dodgy business scheme and try to solve the problem of Fanwell's stray dog - all while waiting for the rain to come.

In the second two-parter, The House of Unexpected Sisters and The Colours of All the Cattle, the Agency investigates a saleswoman's claims of unfair dismissal. Meanwhile, Mma Ramotswe discovers an unknown relative and a family mystery and reluctantly agrees to stand for election to the local council....

Directed by Gaynor MacFarlane (The Fat Cattle Club, Precious and Grace) and Eilidh McCreadie (The House of Unexpected Sisters, The Colours of All the Cattle)

The Fat Cattle Club/Precious and Grace

The House of Unexpected Sisters/The Colours of All the Cattle