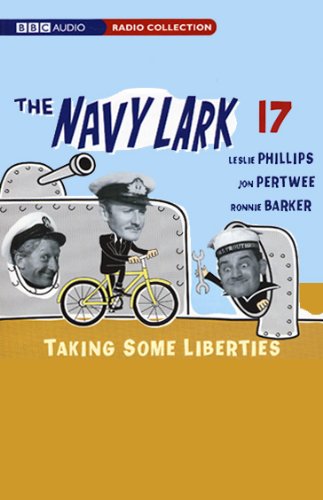 The Navy Lark, one of radio's longest running laughter-makers, kept the nation on the crest of a comic wave from 1959 to 1977.

All at sea in the Senior Service were conniving Petty Officer Jon Pertwee, silly-ass Sub-Lieutenant Leslie Phillips, and the constantly bemused Stephen Murray as 'Number One'. Tenniel Evans was making mischief as Leading Seaman Taffy Goldstein.

In these classic capers, Leslie buy a bicycle, Troutbridge sails to France carrying the Prime Minister's advisor, Goldstein schemes to get the CPO's job, and the ship suffers a mysterious mechanical breakdown when Pertwee decides its next mission is doomed.

So climb aboard and join the merry crew in these four classic capers: Taking Some Liberties, The PM Papa, Getting Rid of Pertwee, and Off to Sea at Last.