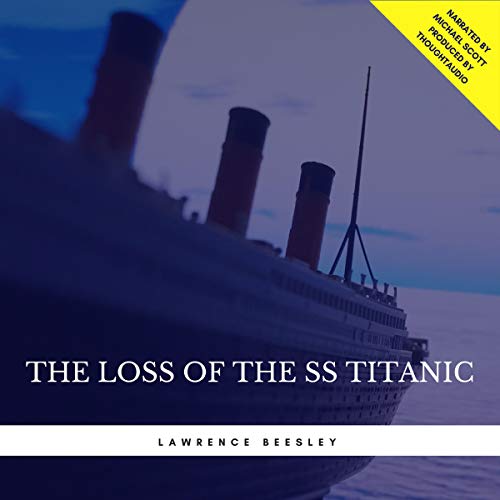 The Loss of the SS Titanic

This account of the sinking of the RMS Titanic was written by Lawrence Beesley and was first published in 1912. The interesting element is that Lawrence Beesley was a survivor of the Titanic disaster and provides a realistic account of some of the events leading to and following the sinking of the Titanic. The RMS Titanic was an Olympic class passenger liner that became infamous for its collision with an iceberg and dramatic sinking in 1912. The second of a trio of superliners, she and her sisters, Olympic and Britannic, were designed to provide a three-ship weekly express service and dominate the transatlantic travel business for the White Star Line.

Built at the Harland and Wolff shipyard in Belfast, Ireland, Titanic was the largest passenger steamship in the world at the time of her sinking. During Titanic's maiden voyage (from Southampton, England; to Cherbourg, France; Queenstown (Cobh), Ireland; then New York), she struck an iceberg at 11:40 PM (ship's time) on Sunday evening April 14, 1912, broke into two pieces, and sank two hours and forty minutes later at 2:20 AM Monday morning.

According to the US Senate investigation, 1,523 people perished in the accident, ranking it as one of the worst peacetime maritime disasters in history and by far the most famous. Titanic's design used some of the most advanced technology available at the time and the ship was popularly believed to be "unsinkable". It was a great shock that, despite the advanced technology and experienced crew, Titanic sank with a great loss of life. The media frenzy about Titanic's famous victims, the legends about what happened on board the ship, the resulting changes to maritime law, and the discovery of the wreck in 1985 by a team led by Robert Ballard and Jean-Louis Michel have made Titanic persistently famous in the years since.

This account by a survivor of the Titanic disaster was first published in 1912.