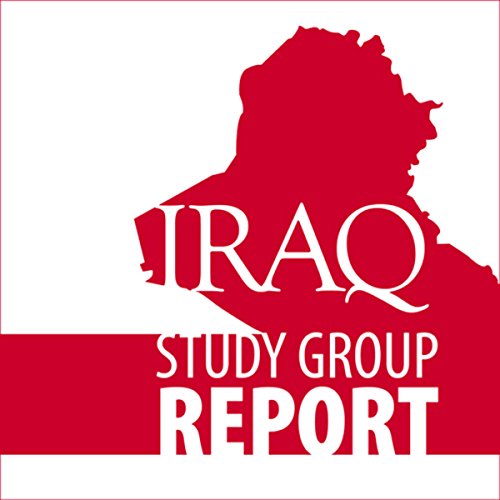 This historic 2006 document analyzes and makes recommendations for United States foreign policy in Iraq. Published in the midst of the "grave and deteriorating" war that America was waging in the Middle East, The Iraq Study Report aimed to "bring a responsible conclusion" to that Bush-era conflict. The success of this audiobook can be attributed both to its bipartisan authors, who aimed to reach world leaders as well as a general audience, and to the exceedingly accessible voice of Stow Lovejoy. Lovejoy brings an amiable, upbeat tone to content that often sounds catastrophic. One could say that as far as politics is concerned, his performance embodies the old idiom "You can catch more flies with honey than with vinegar".

After nine months of examining and analyzing U.S. military involvement in Iraq, the bi-partisan Iraq Study Group issued this report on Dec. 6, 2006.

The report calls the situation in Iraq "grave and deteriorating" and says, "There is no path that can guarantee success, but the prospects can be improved". The report makes a wide-ranging series of 79 recommendations for political, diplomatic, economic, and military action so the U.S. can "begin to move its combat forces" out of Iraq.

The co-chairs of the Iraq Study Group were James A. Baker III, who served Pres. Reagan as Secretary of the Treasury and White House Chief of Staff, and Pres. George H.W. Bush as Secretary of State; and former Rep. Lee Hamilton, a Democrat who served in Congress for 34 years.

Four organizations participated in preparing the report: United States Institute of Peace; James A. Baker III Institute for Public Policy, Rice University; Center for the Study of the Presidency; and Center for Strategic and International Studies.

This audiobook is a must-listen. Bear in mind the authors - a crossparty set of American politicians who for the most part thought originally that it was a good idea to invade Iraq. They have changed their minds for the same reasons that most sane people never wanted the war - they see now that America can only lose, and that the Bush Administration has cynically and callously sent 3000 American soldiers to their deaths, as well as many times that number of Iraqi civilians.

The Iraq Study Group Report is a purely factual account, and there are a lot of statistics to get through, but the message that comes through is clear - a swift and managed exit is the only option that America now has available. The corollary not explicitly stated by Jim Baker and his co-authors, but implicitly drawn from the text, is that George W. Bush and his administration are at best inept, and at worst criminals.