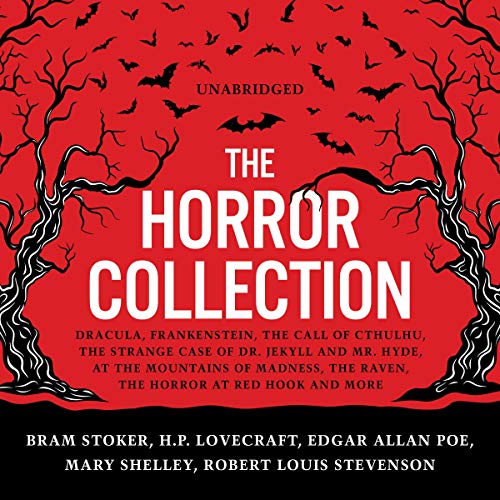 Inside this classic horror set, you’ll find disturbing and spine-chilling stories from some of the most beloved horror authors of all time, from Lovecraft’s strange pulp fiction to tales from the 19th century, discover the unsettling world of monsters, ancient deities, and the occult.

The Gothic horror Dracula, the chilling tale of the Count’s quest to find new blood, and the people who stood in his way.

H. P. Lovecraft’s fan-favorite Cthulhu mythos, with disturbing short stories including The Call of Cthulhu, The Dunwich Horror, and The Shadow over Innsmouth.

Strange Case of Dr. Jekyll and Mr. Hyde delves into Victorian London with a tale of good, evil, and monstrous transformations.

Frankenstein, a story about a scientist creating a terrible monster which has stayed in the minds of audiences since 1818.

One of Lovecraft’s earlier works, The Horror at Red Hook tells the tale of a New York Detective and his encounters with a sinister and supernatural occult.

When a trip to Antarctica goes horribly wrong, At The Mountains of Madness contains geologist William Dyer’s discovery of an ancient, terrible secret lost among the ice.

And Lovecraft’s The Dream-Quest of Unknown Kadath, the strange quest of Randolph Carter to find a sunset city in his dreams, which takes him to magical cities, horrifying monsters, and the Outer Gods.