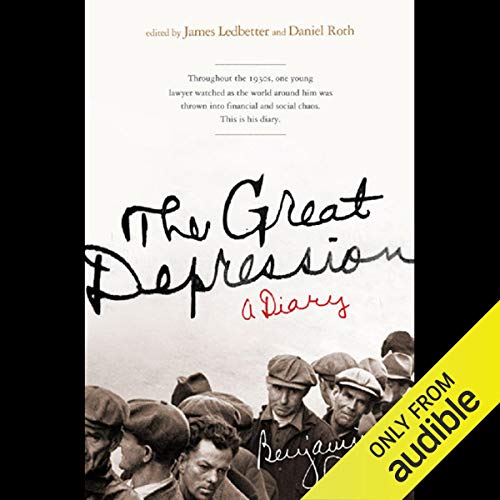 This title offers a first-person diary account of living through the Great Depression, with haunting parallels to our own time.

Benjamin Roth was born in New York City in 1894. When the stock market crashed in 1929, he had been practicing law for approximately 10 years, largely representing local businesses. After nearly two years, he began to grasp the magnitude of what had happened to American economic life, and he began writing down his impressions in a diary that he maintained intermittently until he died in 1978.

Roth's words from that unique time seem to speak directly to readers today. His perceptions and experiences have a chilling similarity to our own era. Like many of us, Roth struggles both to understand and to educate himself about what was going on around him. He is sceptical of big government, yet ultimately won over by FDR's New Deal. This collection of his diary entries, edited by James Ledbetter, editor of Slate's "The Big Money," reveals another side of the Great Depression - one lived through by ordinary, middle-class folks, who on a daily basis grappled with a swiftly changing economy coupled with anxiety about the unknown future. It is highly topical - and timely.

In short, concise, and thoughtful entries, Roth chronicles the most telling moments of the Great Depression, from the drop in the price of movie tickets to Hoover's failed free-market solutions, to the rise in foreclosures in his hometown and how to benefit from 'bargains' at the much-diminished stock exchange. It is published one-year after the bankruptcy of Lehman Bros sent the world markets on a deep downward slide, and around the 80th anniversary of "Black Tuesday".