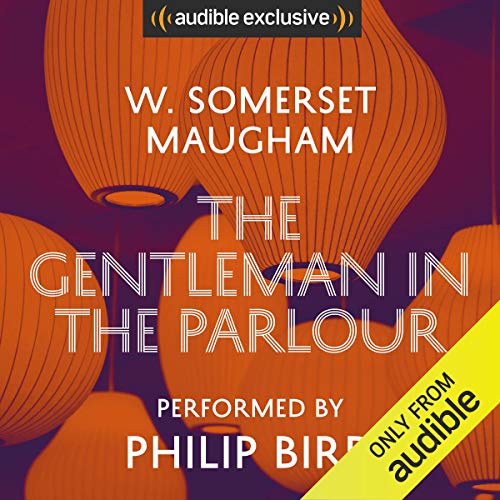 The Gentleman in the Parlour

Somerset Maugham's success as a writer enabled him to indulge his adventurous love of travel, and he recorded the sights and sounds of his wide-ranging journeys with a unique urbane, wry style. The Gentleman in the Parlour is an account of the author's trip through what was then Burma and Siam, ending in Haiphong, Vietnam. Whether by river to Mandalay, on horse through the mountains and forests of the Shan States to Bangkok, or onwards by sea, Maugham's vivid descriptions bring a lost world to life.

Nearly 100 years later Somerset Maugham is still considered one of the best travel writers. The audiobook gives the listener an honest depiction of colonialist Burma. His gift with words evocatively paints beautiful descriptions of incredible landscapes and offers the audience a historical account of a world where attitudes were very different.

William Somerset Maugham was an English playwright, novelist and short story writer. He was among the most popular writers of his era and reputedly the highest paid author of the 1930s. His first novel, Liza of Lambeth, sold out in a matter of weeks, prompting Maugham to leave medicine and embark on a 65-year career as a man of letters. By 1914 he was famous, with 10 successful plays produced and 10 novels published. In 1917, he was asked by the British Secret Intelligence Service (now MI6) to undertake a special mission in Russia; an experience which would go on to inspire Ashenden, a collection of short stories about a gentlemanly spy that influenced Ian Fleming's James Bond series.

Maugham's most famous works include Of Human Bondage, a semiautobiographical novel, The Moon and Sixpence, Cakes and Ale and The Razor's Edge. His writing has inspired a string of over 35 film adaptations and has influenced many notable authors, including Anthony Burgess, George Orwell, and Gabriel Garcia Marquez.

Philip Bird has recorded dozens of titles for Audible, most recently Ron Hall & Nicholas Tomalin's The Strange Last Voyage of Donald Crowhurst and Georges Simenon's The Mahé Circle. Recent theatre credits include Labyrinth, Sunny Afternoon, The Cherry Orchard, and several plays at Shakespeare's Globe, including The Merry Wives of Windsor, As You Like It, and The Merchant of Venice.

Bird's television credits include Midsomer Murders, Emerald City, EastEnders, Casualty, Emmerdale, My Family, Heartbeat, Coronation Street, and Holby City. His films include Blessed, Imagine Me and You, and Killing Joe. His radio credits include When the Dog Dies and readings for Something Understood.

"Maugham's finest travel book.... As the urbane novelist wends his way through tropic climes, he reads Proust under the mosquito netting, listens to stories of passion and madness from British colonials gone to seed, and bears up under the merciless sun, sipping at a gin and bitters and laying out a hand of solitaire." (Washington Post)
"An elegant writer's notebook, imaginative, crammed with impressions and ideas received simply and directly, without the filtering screens of literariness or Englishness.... He writes with majestic plainness." (The Times)
"A delightful book - it contains vivid travel impressions, some autobiographical confidences, and the plots for a dozen novels." (Spectator)

Das sagen andere Hörer zu The Gentleman in the Parlour

Somerset Maugham takes the reader on a delightful journey throughout Southeast Asia of the 1920's. It is an exquisite journey through a region which continues to fascinate to this day. The author accompanies the reader on this literary journey with humorous observations, outrageous biases of his time and perceptive encounters with others throughout.