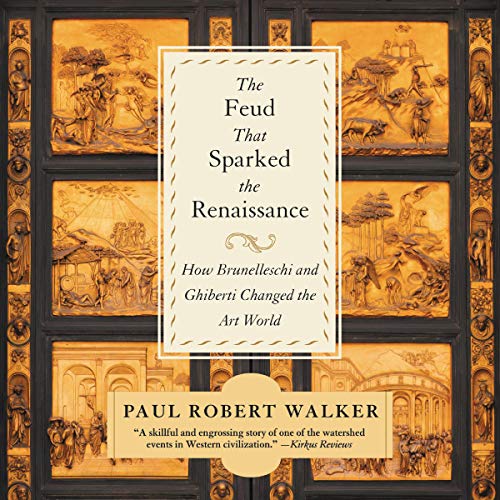 The Feud that Sparked the Renaissance

The Feud that Sparked the Renaissance

Joining the best sellers Longitude and Galileo’s Daughter, a lively and intriguing tale of two artists whose competitive spirit brought to life one of the world’s most magnificent structures and ignited the Renaissance.

The dome of the Santa Maria del Fiore, the great cathedral of Florence, is among the most enduring symbols of the Renaissance, an equal to the works of Leonardo and Michelangelo. Its designer was Filippo Brunelleschi, a temperamental architect and inventor who rediscovered the techniques of mathematical perspective. Yet the completion of the dome was not Brunelleschi’s glory alone. He was forced to share the commission with his archrival, the canny and gifted sculptor Lorenzo Ghiberti.

In this lush, imaginative history - a fascinating true story of artistic genius and personal triumph - Paul Robert Walker breathes life into these two talented, passionate artists and the competitive drive that united and dived them. As it illuminates fascinating individuals from Donatello and Masaccio to Cosimo de’Medici and Leon Battista Alberti, The Feud that Sparked the Renaissance offers a glorious tour of 15th-century Florence, a bustling city on the verge of greatness in a time of flourishing creativity, rivalry, and genius.