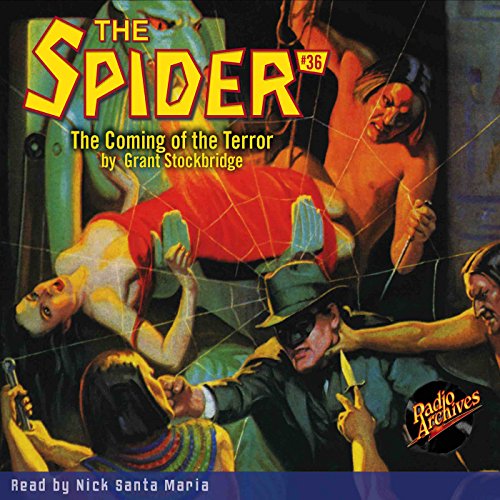 The Coming of the Terror

Stripped of his wealth, cut off from his faithful helpers, Richard Wentworth, known and feared throughout the Underworld as the avenging Spider, struggles with his most powerful and wily foe - the Man who came out of the East! With Wentworth's best friend, Police Commissioner Kirkpatrick framed for murder; with the entire city capitulating before that new and cruelly cunning menace from the Orient, the Spider himself seems doomed to die on the torture racks of the Far East!

One man against more evil than anyone could ever imagine, enemies feared by any normal man. The Spider knew that, but it did not check the wild impulse to laughter that squeezed his lungs. It was no wonder that men call the Spider mad!

Once, in a typical blood-and-screaming-bullets carnage of urban combat, Police Commissioner Kirkpatrick ticked off a long list of suspects. Wentworth blurted out this self-revealing truth. "I'm suspicious of everyone," he admitted, "even of myself sometimes." And well he should be. For Richard Wentworth was an undiagnosed manic-depressive - if not paranoid schizophrenic - subject to violent mood swings, climbing to unutterable heights of exultation in one scene, then crashing into the blackest depths of despair the next. When the Spider-madness came over him, he might pick up his treasured Stradivarius violin and launch into a night-long serenade to soul-searching. Or, he might putty up his face, don black hat and cape, go out Spidering....

Nick Santa Maria brings the action to vibrant life, narrating with a fever-pitch intensity. "The Coming of the Terror" originally published in The Spider magazine, September 1936.

Das sagen andere Hörer zu The Coming of the Terror