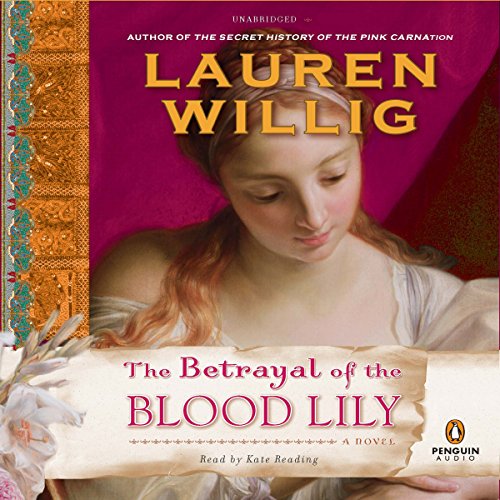 The Betrayal of the Blood Lily

The Betrayal of the Blood Lily

The heroines of Lauren Willig's best-selling Pink Carnation series have engaged in espionage all over 19th-century Europe. In the sixth stand-alone volume, our fair English heroine travels to India, where she finds freedom - and risk - more exciting than she ever imagined.

Everyone warned Miss Penelope Deveraux that her unruly behavior would land her in disgrace someday. She never imagined she's be whisked off to India to give the scandal of her hasty marriage time to die down. As Lady Frederick Staines, Penelope plunges into the treacherous waters of the court of the Nizam of Hyderabad, where no one is quite what they seem - even her husband.

In a strange country, where elaborate court dress masks even more elaborate intrigues and a dangerous spy called the Marigold leaves venomous cobras as his calling card, there is only one person Penelope can trust.

Captain Alex Reid has better things to do than play nursemaid to a pair of aristocrats. Or so he thinks - until Lady Frederick Staines out-shoots, out-rides, and out-swims every man in the camp. She also has an uncanny ability to draw out the deadly plans of the Marigold and put herself in harm's way. With danger looming from local warlords, treacherous court officials, and French spies, Alex realizes that an alliance with Lady Staines just might be the only thing standing in the way of a plot designed to rock the very foundations of the British Empire.