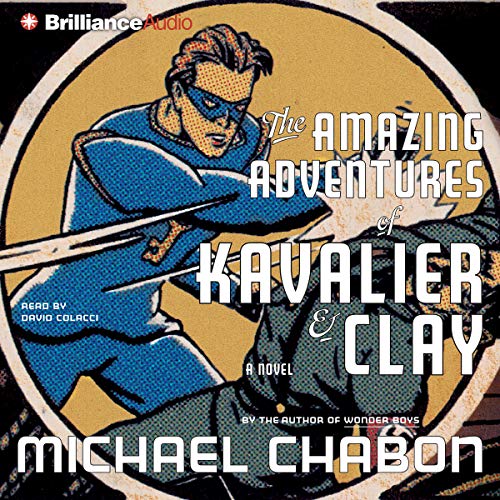 The Amazing Adventures of Kavalier & Clay

It's 1939, in New York City. Joe Kavalier, a young artist who has also been trained in the art of Houdiniesque escape, has just pulled off his greatest feat: smuggling himself out of Hitler's Prague. He's looking to make big money, fast, so that he can bring his family to freedom. His cousin, Brooklyn's own Sammy Clay, is looking for a partner in creating the heroes, stories, and art for the latest novelty to hit the American dreamscape: the comic book.

Inspired by their own fantasies, fears, and dreams, Kavalier and Clay create the Escapist, the Monitor, and the otherworldy Mistress of the Night, Luna Moth, inspired by the beautiful Rosa Saks, who will become linked by powerful ties to both men. The golden age of comic books has begun, even as the shadow of Hitler falls across Europe.

The Amazing Adventures of Kavalier & Clay is a stunning novel of endless comic invention and unforgettable characters, written in the exhilarating prose that has led critics to compare Michael Chabon to Cheever and Nabokov. In Joe Kavalier, Chabon, writing "like a magical spider, effortlessly spinning out elaborate webs of words that ensnare the reader" (Michiko Kakutani, The New York Times), has created a hero for the century.

"Virtuoso Chabon takes intense delight in the practice of his art, and never has his joy been more palpable than in this funny and profound tale of exile, love, and magic." ( Booklist)
"This thoughtful and entertaining work is so well presented by Colacci - even down to the Yiddish accents - that his performance is a truly memorable experience." ( AudioFile)