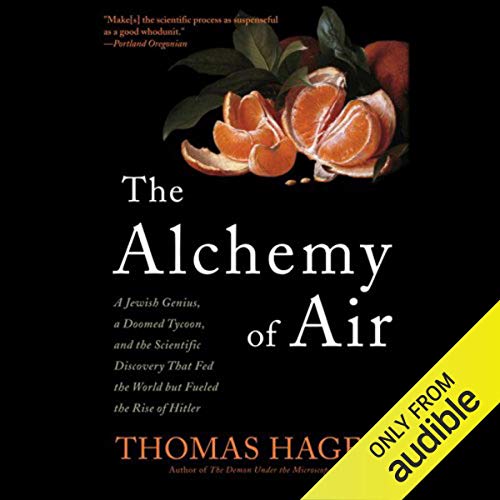 The Alchemy of Air

A Jewish Genius, a Doomed Tycoon, and the Scientific Discovery That Fed the World but Fueled the Rise of Hitler

A sweeping history of tragic genius, cutting-edge science, and the discovery that changed billions of lives - including your own.

At the dawn of the 20th century, humanity was facing global disaster. Mass starvation, long predicted for the fast-growing population, was about to become a reality. A call went out to the world's scientists to find a solution. This is the story of the two enormously gifted, fatally flawed men who found it: the brilliant, self-important Fritz Haber and the reclusive, alcoholic Carl Bosch.

Together they discovered a way to make bread out of air, built city-sized factories, controlled world markets, and saved millions of lives. Their invention continues to feed us today; without it, more than two billion people would starve.

But their epochal triumph came at a price we are still paying. The Haber-Bosch process was also used to make the gunpowder and high explosives that killed millions during the two world wars. Both men were vilified during their lives; both, disillusioned and disgraced, died tragically. Today we face the other unintended consequences of their discovery - massive nitrogen pollution and a growing pandemic of obesity.

The Alchemy of Air is the extraordinary, previously untold story of two master scientists who saved the world only to lose everything and of the unforseen results of a discovery that continue to shape our lives in the most fundamental and dramatic of ways.

"This scientific adventure spans two world wars and every cell in your body." ( Discover magazine)
“I know of few other books that provide the general reader with a better portrait of chemistry as the most useful of sciences, and I intend to recommend it to scientists and non-scientists alike.” ( The Journal of Chemical Education)