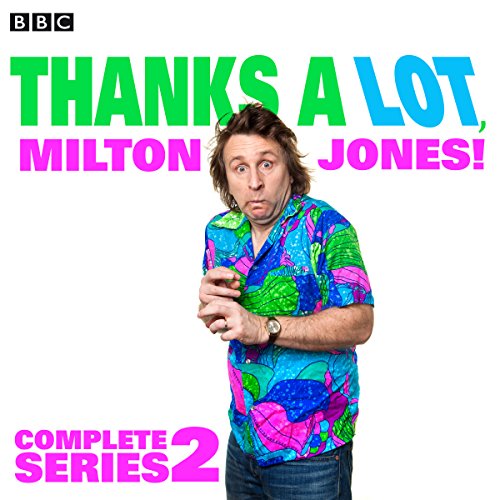 The genius in the mad shirts from Mock the Week stars in his own series costarring Tom Goodman-Hill, Josie Lawrence, Ben Willbond and Dan Tetsell.

Mention Milton Jones to most people and the first thing they think is, 'Help!' In this show he has decided to set himself up as a man who can help anyone anywhere - whether they need it or not. Because, in his own words, there's 'no problem too problemy'. So when you're close to the edge, then Milton can give you a push....

In the first of these six episodes, Milton becomes a responsible, sober-suited financial advisor, and fights off a Swedish invasion with the aid of his trusty hamster.

In the second episode, when Milton finally decides to empty his bins, he accidentally makes both a delicious sparkling wine and a deadly enemy.

In the next episode, when Milton discovers the local lido is under threat of closure, he unwisely decides to organize a sit-in. But his dreams for a state-of-the-art aquacentre are sunk when his trunks are declared a biohazard.

In episode four, when Milton launches a job agency it turns out that getting people into work actually is rocket science. Which is why his best client accidentally goes ballistic. After that, when Milton opens up a car repair shop, he finds he's on a collision course with a notorious local villain. Meanwhile, a mysterious tin of travel sweets comes to a sticky end.

And in the final part, Milton offers his services as a bodyguard and discovers that a South American diva and a tent full of homemade jam don't mix as well as he'd imagined.

Produced and directed by David Tyler; A Positive Production for BBC Radio 4.