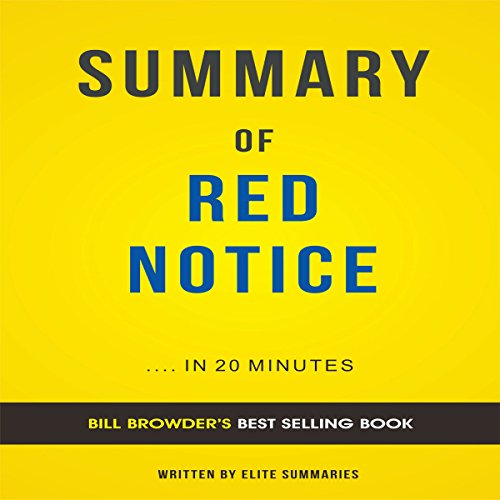 Red Notice covers the story of the author's own hedge fund, Hermitage Capital, when it was the largest Russian foreign investor for a period of time. He was a Wall Street champion who followed his own instinct to invest in Russia after the Soviet Union breakup. He became an accidental activist as he later exposed cases of corruption. His life was threatened, and his lawyer was tortured to death.

Red Notice serves as a historical account, financial narrative, and a political crusade suitable for crime thriller fans and finance work enthusiasts. Bill Browder's story in fighting for justice in Russia was intense and inspiring. Exposing the concept of corruption culture, and impunity in Putin's Russia today, Browder becomes a true political hero. A brutal reality, with a very high relevance to the current world's situation, Red Notice is a must-listen.

Red Notice is a terrifying account, filled with real cases of corruption, cold-blooded murder, and deceitful acts, all at once. It is fiery, it is motivating, and it creates a determination in your very soul to end these dirty political stunts.