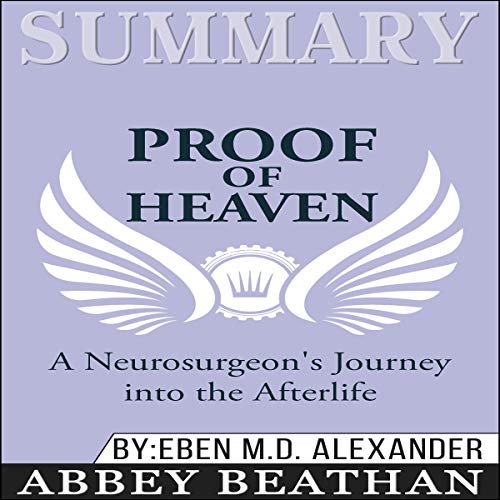 Summary of Proof of Heaven

Disclaimer: This is NOT the original book.

A Harvard-trained neurosurgeon faced his own mortality and survived a coma that lasted seven days. After he woke up, what he discovered during his slumber made him a believer. Driven into a coma and with no hope of surviving, Eben managed to pull through. However, in his seven-day slumber, he had vivid dreams about things he didn't know about, like a deceased birth sister he didn't get a chance to meet. He was puzzled, and as a scientist, he couldn't find an explanation. In the state his brain was in, it couldn't have functioned at all. So, why did it? How could he know details about facts that he didn't know before? The answer changed his life for good.

"Our eternal spiritual self is more real than anything we perceive in this physical realm, and has a divine connection to the infinite love of the Creator." (Eben Alexander)

Proof of Heaven tells the tale of his attempt to comprehend consciousness and his origin. After his coma, Alexander began his journey to prove we are conscious despite our brains, as if it's embedded to our very soul. The only answer he could find through all his research was within God, so he turned to Him. Alexander assures us he found scientific proof to his theory and is willing to show us, are you willing to listen?

P.S. Proof of Heaven is an extremely spiritual book that talks about how a non-believer turned to God in order to find the answers he was looking for.

Note: This summary is wholly written and published by Abbey Beathan. It is not affiliated with the original author in any way.