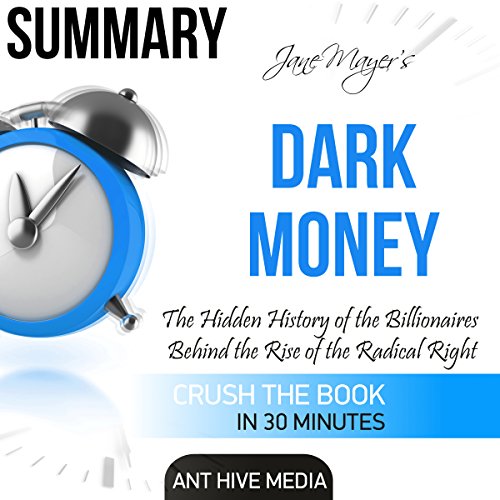 Summary of Jane Mayer's Dark Money: The Hidden History of the Billionaires Behind the Rise of the Radical Right

This is a summary of Jane Mayer's Dark Money: The Hidden History of the Billionaires Behind the Rise of the Radical Right. It is a strong and powerful book that shows an in-depth report of a network made up of the wealthy and the influential and their goal of creating a clear plan to change the American political structure. Within the network are people whose wealth is overflowing. They create an environment fashioned after their corporate and personal interests. In fact, some of these companies have been accused of problems like worker safety, federal pollution, tax laws and even securities.

There are two main people that are part of the network, David Koch and Charles Koch. The brothers inherited their father's wealth, who in turn built their huge fortune from oil refineries in both Hitler's Germany as well as Stalin's Russia. With their money, they gathered resources to create a major influence in various sectors like in the Congress, academic, court, think tanks, state houses and hopefully, the US Presidency.

Jane Mayer spent five years conducting hundreds of interviews - including with several sources within the network - and scoured public records, private papers, and court proceedings in reporting this book.

In a taut and utterly convincing narrative, she traces the byzantine trail of the billions of dollars spent by the network and provides vivid portraits of the colorful figures behind the new American oligarchy.

This summary is aimed for those who want to capture the gist of the book but don't have the time to listen to the whole thing. The book is for every person interested in American democracy and what it means for its future. This summary enables you to know the unique ideas presented in the book clearly and precisely. It provides all of the benefits and lessons the actual book has to offer.

Ant Hive Media reads every chapter, extracts the understanding and leaves you with a new perspective and time to spare. We do the work so you can understand the book in minutes, not hours.

Das sagen andere Hörer zu Summary of Jane Mayer's Dark Money: The Hidden History of the Billionaires Behind the Rise of the Radical Right