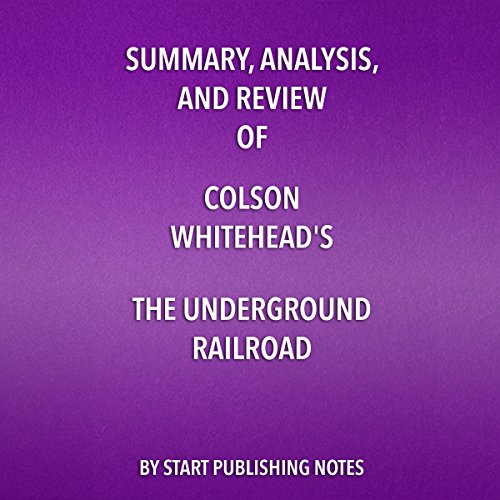 Summary, Analysis, and Review of Colson Whitehead's, The Underground Railroad: A Novel

Please note: This is a key takeaways and analysis of the book and not the original book. Start Publishing Notes' Summary, Analysis, and Review of Colson Whitehead's The Underground Railroad: A Novel, includes a summary of the audiobook, review, analysis & key takeaways, and detailed "About the Author" section.

Preview: The Underground Railroad by Colson Whitehead, is an audiobook about Cora, an enslaved woman in Georgia who escapes from a plantation and heads north. The audiobook is loosely based on real slave narratives. However, it includes fantastic and ahistorical elements. For example, the historical Underground Railroad was a network, which helped slaves escape. In the audiobook, the Underground Railroad is an actual buried railway line. Ajarry, Cora's grandmother, was enslaved in Africa and shipped to America. She was sold many times before she ended up on the Randall plantation in Georgia, where she bore Cora's mother, Mabel. Mabel ran away from the plantation when Cora was 10, leaving the girl to fend for herself. Cora hated Mabel for leaving her. She never found out that Mabel had in fact only gotten a few miles from the plantation, and then decided to turn back, because she couldn't bear abandoning her child. However, before she could return, a poisonous snake bit her and she died in the swamp. The slave catcher who was hired to bring her back, named Ridgeway, never found her. His failure nagged at him.