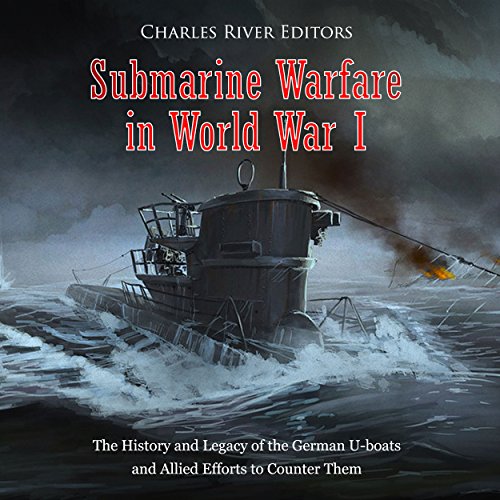 Submarine Warfare in World War I: The History and Legacy of the German U-boats and Allied Efforts to Counter Them

Submarine warfare began tentatively during the American Civil War (though the Netherlands and England made small prototypes centuries earlier, and the American sergeant Ezra Lee piloted the one-man "Turtle" vainly against HMS Eagle near New York in 1776). Robert Whitehead's invention of the torpedo introduced the weapon later used most frequently by submarines. Steady improvements to Whitehead's design led to the military torpedoes deployed against shipping during both World Wars.

World War I witnessed the First Battle of the Atlantic, when the Kaiserreich unleashed its U-boats against England. During the war, the German submarines sent much of the British merchant marine to the bottom. Indeed, German reliance on U-boats in both World War I and World War II stemmed largely from their nation's geography. The Germans eventually recognized the superiority of the Royal Navy and its capacity to blockade Germany's short coastline in the event of war. While the British could easily interdict surface ships, submarines slipped from their Kiel or Hamburg anchorages unseen, able to prey upon England's merchant shipping.

The sleek hunter-killers lurking beneath the waves, using periscopes to close in unnoticed on their prey, added a new, nerve-wracking element to naval warfare. The mere threat of submarine attack immediately altered naval tactics and strategies employed by both the Western Allies and the Central Powers, shifting them towards a more cautious approach, especially at the war’s start when the submarine threat remained untested.

During World War I, German U-boats operated solo except on one occasion. Initially, the British and nations supplying England with food and materiel scattered vessels singly across the ocean, making them vulnerable to the lone submarines. However, widespread late war re-adoption of the convoy system tipped the odds in the surface ships' favor, as one U-boat skipper described: "The oceans at once became bare and empty; for long periods at a time the U-boats, operating individually, would see nothing at all; and then suddenly up would loom a huge concourse of ships, thirty or fifty or more of them, surrounded by a strong escort of warships of all types" (Blair, 1996, 55).

World War I proved the value of submarines, ensuring their widespread employment in the next conflict, but by using U-boats against the shipping that kept Britain supplied, it might have ultimately cost Germany and Austria-Hungary the war by providing a reason for President Woodrow Wilson to bring the United States into the struggle.

Das sagen andere Hörer zu Submarine Warfare in World War I: The History and Legacy of the German U-boats and Allied Efforts to Counter Them