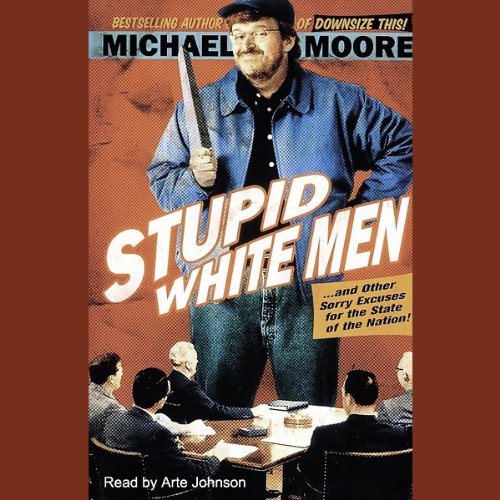 Stupid White Men...and Other Sorry Excuses for the State of the Nation!

The government has been seized by a ne'er-do-well rich boy and his elderly henchmen...Our great economic expansion is unraveling faster than a set of Firestones...Our water is poisoned, the ozone's in shreds, and the SUVs are advancing like a plague of locusts...

Remember when everything was looking up? When the government was running at a surplus, pollution was disappearing, peace was breaking out in the Middle East and Northern Ireland, and the Bridge to the Twenty-First Century was strung with high-speed Internet cable and paved with 401K gold?

Well, so much for the future. Michael Moore, the award-winning provocateur behind Roger & Me and the best seller Downsize This!, now returns to size up the new century - and that big, ugly special-interest group that's laying waste to the world as we know it: stupid white men.

Whether he's calling for United Nations action to overthrow the Bush Family Junta, begging African-Americans to place "whites only" signs over the entrances of unfriendly businesses, or praying that Jesse Helms will get kissed by a man, Stupid White Men is Mike's Manifesto on Malfeasance and Mediocrity. Among his targets:

"The latest appraisal of contemporary American society by a popular and iconoclastic commentator." (Booklist)
"As fulminating and crammed with infuriating facts as any right-wing best seller, as irreverent as The Onion, and as noisily entertaining as a wrestling smackdown." (Amazon.com)

Definitely NOT for stupid people

As I read some comments about this book I realize that I do live among them: stupid white people. certainly not only white as the author wants but what some human beings see in this book as exaggerating is only a perfect sarcasm. If You don't understand it, You are a stupid, probably white and probably man. the book is perfect and the knowledge of the author in all life aspects kills. It's pretty unbelievable that one person wrote this book because of all the topics it contains as well as knowledge, data and experiences about them all. PERFECT!!!